1-Sentence-Summary: The Gift Of Fear is a guide to understanding how your fear and instincts about other people can protect you by showing you how to recognize and understand the warning signs that criminals and violent people exhibit before they strike. 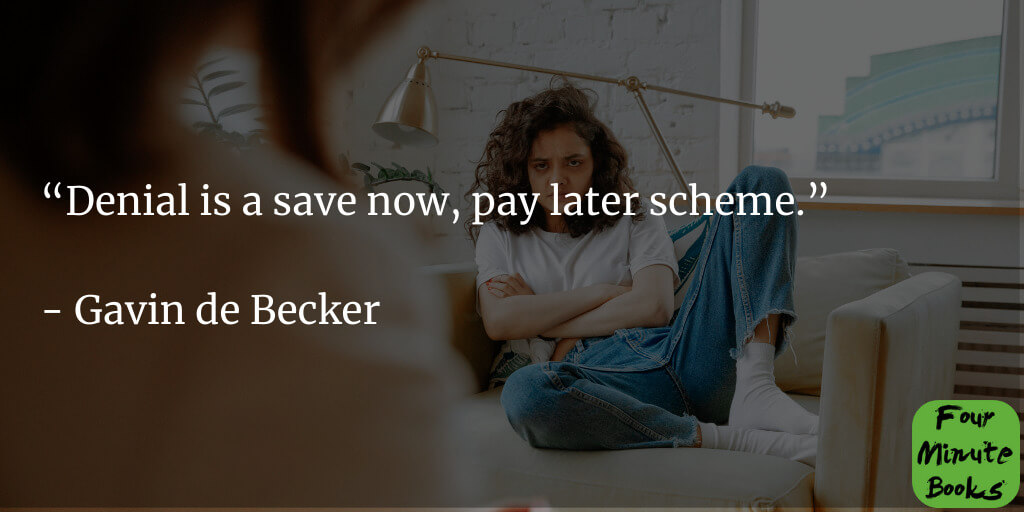 Michael Cantrell is a police officer who takes his intuition and dreams very seriously. One day it even saved his life. He and his partner, David Patrick, once pulled over a car that had three shady men inside.

Cantrell identified the telltale sign of danger when the two men in the backseat wouldn’t make eye contact with him. It wasn’t long afterwards that his heightened awareness helped him notice a gun on the floor before the men could get to it.

His partner David, however, wasn’t so observant, and it cost him. He had a dream in which he got shot and ignored it even after Cantrell told him to watch out. Not long later, he confronted some armed robbers alone and was shot, but luckily survived.

This is just one example of the importance of our intuition and even our sense of fear. We can tell when something’s not right in a situation. And if we learn to listen and enhance these abilities, it can save our lives.

Using fear to your advantage to keep yourself safe is what Gavin de Becker teaches how to do in his book The Gift of Fear: And Other Survival Signals That Protect Us from Violence.

Here are 3 of the greatest lessons I’ve learned from this book:

Fear can be good for you?! Let’s jump right into these lessons and see how!

Lesson 1: Watch out for overly friendly and charming strangers.

Criminals know that if they can get you to let your guard down, they can get what they want from you. That’s why they’ll employ special tactics to try to make you trust them. It takes skill to see through their deceptiveness, but you can learn how to do it.

First, watch out for what’s known as forced teaming. This is when a criminal will pretend to be your friend to get you to do something. It’s easy to notice if they use the word “we” when describing a situation in which they’re trying to help you.

Take a woman named Kelly’s experience, for example. While carrying groceries up the stairs, a bag ripped, and cans tumbled everywhere. A man below began collecting the cans and offered to help. When Kelly refused, he said, “we have a cat to feed up there!” in an attempt to make her feel like he was on her side.

But this couldn’t be further from the truth. It turned out the man was a rapist and murderer. Kelly got extremely lucky that day.

Another tip for protecting yourself is to be wary of seductiveness in strangers. This is yet another way criminals try to get you to stop listening to your intuition. And if you know anything about Ted Bundy, falling for it can have serious consequences.

No matter how charming somebody is, if they don’t respect your wishes, that’s a sign they’re dangerous.

Lesson 2: To protect yourself from criminals, use empathy and read body language.

Do you know somebody that, when they enter a room, everybody feels their presence? Maybe they stand in a powerful pose or take up more space by acting taller or stronger.

Whatever the case, this is just one example of how people use body language to convey how they feel. This is good news for you when trying to stay safe, though, because the body language of violent people is almost always the same.

Plus, many mannerisms are done unconsciously. Which means it can be easy to spot the signs of aggression. Only, if you know what you’re looking for. Learning to recognize the signs of it might save your life someday.

Make sure to watch out for a jutting chin as one sign of anger. Another way to tell if someone is a threat is if they flare their nostrils. And people who seem always to be staring or glaring at you are often violent within.

Empathy, which is the ability to put yourself in another person’s shoes, is another way to protect yourself. If you can tell what emotions someone is feeling, you can more accurately analyze the risk they might pose.

Imagine you’re starting to get angry emails from an employee you just fired. Think about what he’s going through to find out what he wants to accomplish by what he’s doing.

It wouldn’t be in his best interest to send threatening messages if he wanted his job back. So he might be seeking revenge, and you may need to be careful.

Lesson 3: Knowing when something’s dangerous and when it doesn’t come down to the signals.

Do you think you’d be able to tell whether a stalker was dangerous or merely strange? Either way, it’s creepy, but how fast you need to react in these situations depends on the details.

Take the example of John Searings determination to get on The Tonight Show in the 80s, for instance. He sent one letter requesting to be on the show. After that, the studio sent him an autographed photo. He then thought that that was the end.

But Searing persisted and sent over 800 letters asking the same thing. He didn’t even sound threatening, so the producers decided to let him have what he wanted. After his appearance on the show, the host, Johnny Carson, asked him to stop sending letters, and Searing did.

While this story ended up alright, not every other example does, especially when people don’t pay attention to the signs of trouble.

One day in 1992, a student at Bard College at Simon’s Rock named Wayne Lo received a suspicious package. It had the words “Classic Arms” written on it.

Instead of opening it, the dean decided not to violate student privacy and handed it over. But he did ask a dorm supervisor to check in on Wayne. When she asked to see what was in the package, he wouldn’t let her. When she came back later to find it had been opened, Wayne said it was just “harmless” gun parts.

Later that night, someone called in, warning of an impending shooting, but nobody called the police. Because those in charge failed to heed the warning signs, Wayne couldn’t be stopped before shooting six people and killing two.

The Gift Of Fear Review

I thought The Gift Of  Fear was a fascinating book. Although I have to say that it wasn’t the take on fear I expected when I first started it. Still, this stuff is important knowledge to have!

Who would I recommend The Gift Of Fear summary to?

The 25-year-old woman who lives in a big city, the 57-year-old that’s been threatened and is anxious about crime, and anyone that wants to find ways to be safer.