1-Sentence-Summary: The Five Dysfunctions of a Team uses a fable to explain why even the best teams struggle to work together, offering actionable strategies to overcome distrust and office politics in order to achieve important goals as a cohesive, effective unit. 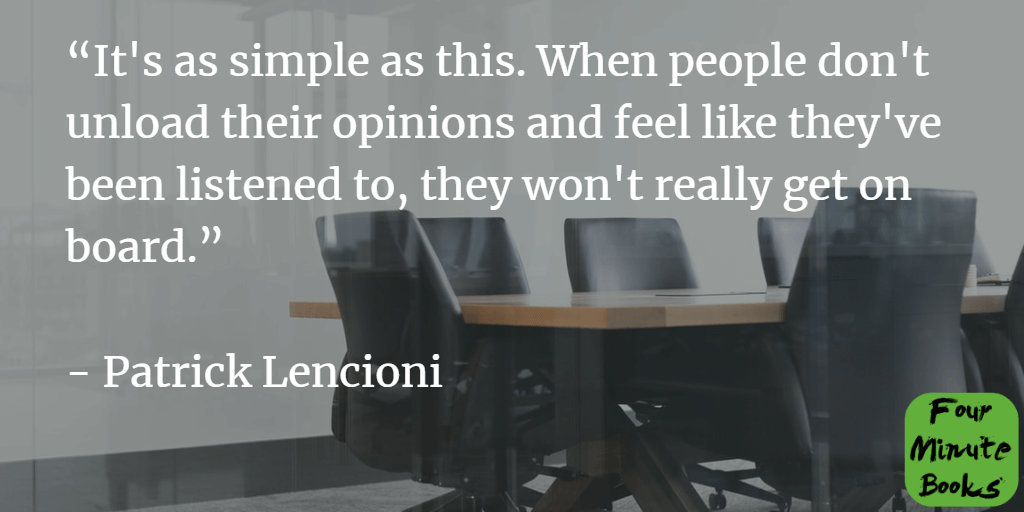 Since the first time you engaged in any team sport as a child, you probably learned this truth: teamwork can be hard. Sometimes one kid wants to have the ball all to himself, and other times players disagree on responsibilities. Even for adults working together is difficult. Politics, ego, and mistrust get in the way of building a well-performing team.

However, an efficient team truly is greater than the sum of its parts, especially in the business world. Exceptional teamwork can give a company the competitive advantage it needs to beat out its rivals.

Patrick Lencioni is a well-known author of many business books and the founder of Table Group, a management consulting firm that specializes in organizational health. In The Five Dysfunctions of a Team: A Leadership Fable, he uses a fictional tale to bring us truthful insights into what makes a good team.

We learn about a struggling Silicon Valley startup DecisionTech under the leadership of new CEO Kathryn Petersen. 2 years earlier, it looked like a promising start-up with all the investors and well-qualified executives you would ever need, but now it’s falling apart because of poor management. The executives were not working together, and the team members struggled to take on responsibilities or come to agreements.

Through their story, we learn the five dysfunctions of a team. These are:

We also learn helpful strategies on how to overcome these dysfunctions and become a cohesive team. Because, as Lencioni puts it, teamwork is the “ultimate competitive advantage.”

Here 3 principles this book taught me:

Let’s discover how to work better with others!

The Five Dysfunctions of a Team Summary

Lesson 1: Being open about mistakes as a group will build trust.

Like any good relationship, trust is the key to a solid team. When members in a group trust each other, they will talk openly about tough or touchy subjects. And if they can talk about hard things, they can find the best solutions.

Team members build trust when they are vulnerable to one another. People need to see that there is no reason to protect themselves and start talking about their mistakes and vulnerabilities. When they do this, others will see the full picture of their peers. When they see that their peers have weaknesses and make mistakes, they will feel less hesitant to share their own flaws. The leader needs to be the example of vulnerability, and the most vulnerable as well. Let’s take a look at an example of this from the fictional story in the book.

At DecisionTech, CEO Kathryn knew the group needed to take the time to share mistakes. She led by telling the team about her previous management failures and her being fired once in the past. By doing this, Kathryn earned the team’s trust and helped them open up and share their own shortcomings also.

Lesson 2: Even if a few people disagree when making decisions, everyone needs to be committed to the final choice.

One of the keys to becoming a great team is to make decisions together and stand by them. Team players realize that making any decision will always be more beneficial than not making a decision. When the team doesn’t make a choice, there is confusion and ambiguity, which will trickle down, affecting work on every level.

However, a consensus may not always be possible. People often have differing opinions, and it’s not easy or practical to please everyone. That’s why effective team members agree to commit to a decision that will help the common goal, regardless of if they agree.

To do this, though, every opinion needs to be heard. Most rational people will accept a decision, even if their opinion differs, as long as their feelings on the matter are listened to and addressed. A quality of a cohesive team is that they will all commit fully to the decisions the group has made, even if they argued against it passionately earlier.

Lesson 3: Focus on collective results rather than individual goals.

In a truly efficient team, members realize that the goal of the team is more important than individual gains. Take for example the story of Kathryn’s husband, a basketball coach. He had to drop one of his best players because that player was more concerned about how many points he scored than whether or not the team won the game.

When someone puts their own goals in front of the team’s, they will hinder everyone else. Every time this happens in the business world, people start to lose their sight of the collective goal and the company suffers. Eventually, those who are exceptional team players will leave.

So what kind of goals should a team make? There are two qualities of good team goals: clearly defined and measurable. If the group’s goal is clear and can be measured, members can’t focus on their own goals because they will be accountable to accomplishing the team goal. Common goals will also encourage team members to help and support one another to make it happen.

The Five Dysfunctions of a Team Review

The Five Dysfunctions of a Team is a powerful tool for anyone who works on a team. The fable makes it interesting and relatable, and the second half has useful ways to overcome the dysfunctions identified. I’m convinced that any team who learns how to avoid these dysfunctions will be amazing at what they do.

Who would I recommend The Five Dysfunctions of a Team summary to?

The 39-year-old manager who wants to find a way to help his team work together to make more sales, the 45-year-old soccer coach who needs a way to help her players be more concerned with winning the game than showing off their own skills, and anybody who works on a team.

Rate this book!
This book has an average rating of 4 based on 6 votes.