1-Sentence-Summary: Team Of Rivals explains why Abraham Lincoln rose above his political rivals despite their stronger reputations and how he used empathy to unite not just his enemies, but an entire country. 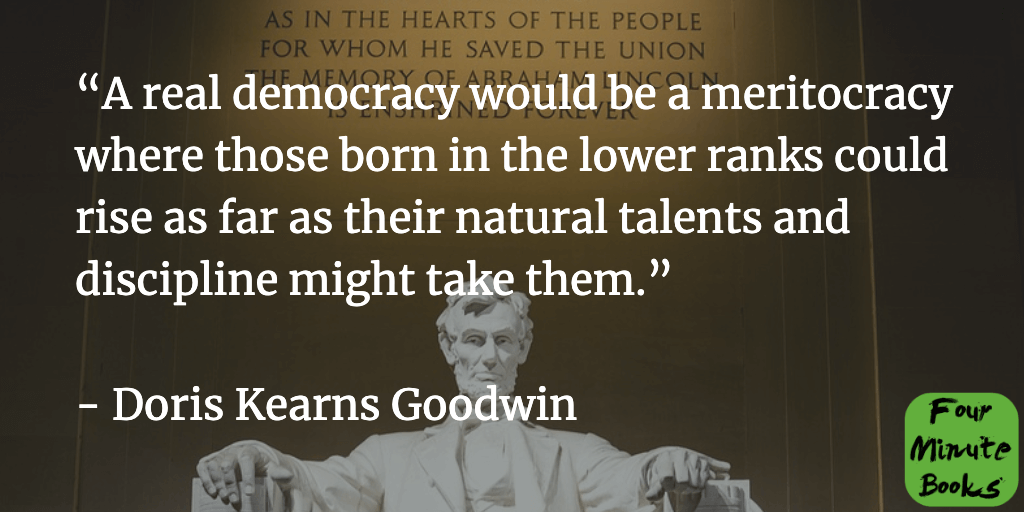 Have you ever gone through a rough patch in your life and later realized the experience prepared you for some future success?

Few people knew more about the benefit of hardships than Abraham Lincoln. At a young age, he endured the loss of family members and suffered a strained relationship with his father. However, these experiences only strengthened Lincoln’s resolve and ambitions.

In the 1840s, after Lincoln’s party, the Whigs, split over the slavery issue, he joined the Republican party. Among the party’s high-profile members were the outspoken statesman Salmon Chase, New York Senator William Henry Seward, and prominent St. Louis statesman Edward Bates. These men all became rivals in the 1860 race for the presidency.

Lincoln quickly built momentum while his rivals rested on their laurels, thinking him to be no threat. After becoming president, however, Lincoln managed to bring these disgruntled opponents together to create the most unusual cabinet in American history. He built a Team Of Rivals, if you will.

Here are 3 lessons I learned from this historical biography by Doris Kearns Goodwin, a book Bill Gates has called “one of his all-time favorites“:

Let’s see how much of Lincoln’s story we can use as a model to apply some of his resolve, spirit, and genius in our own life.

Lesson 1: We all know Lincoln was born in a tough time, but his personal hardships ran much deeper.

As soon as his father determined Abe was capable, he put him to hard labor on the farm, where he chopped down trees, dug wells and plowed fields.

Lincoln’s father didn’t care that Abe wanted to educate himself. Being illiterate himself, he couldn’t see the benefits of learning. He thought it would only distract Abe from chores. He was so opposed to his son’s reading that he even burned Lincoln’s books.

One trait he did pass down to his son was his love of storytelling. Abraham always kept his audience engaged and entertained with pointed anecdotes, humorous tales, and inspiring parables.

Though we don’t know much about his mother, Nancy Hanks, she was a warm and loving soul who taught Abraham to read and write. Sadly, Lincoln would only experience her loving encouragement until age nine, when she died after eating a contaminated dairy product. Less than ten years later, his sister Sarah died during childbirth. He even lost the love of his life, Ann Rutledge, in 1835.

These difficulties didn’t break Lincoln’s spirit, but hardened him and spurred him on to make something great of himself. The lesson is to let our challenges make us better, not bitter. In 1837, he moved to Springfield, Illinois where he worked relentlessly on his career in law and politics.

Lesson 2: Despite being far from the top choice as the Republican nominee, Lincoln won in a true-to-life tortoise and the hare story.

Compared to the other candidates, Lincoln’s career in politics was relatively brief. So, who were these “rivals” and what superpowers did they possess?

William Henry Seward was an expert in the political arena with his rousing senate speeches making headlines across the country. He had an exuberant and charismatic personality. This made a great recipe for success.

Salmon Chase was the great “trailblazer” for the anti-slavery cause. He made a name for himself by defending escaped slaves and fighting against the Fugitive Slave Law.

Edward Bates was one of the most esteemed candidates for nomination with an impressive track record. He was a veteran from the War of 1812 and one of the men responsible for drafting the constitution of Missouri.

In contrast to that, all Lincoln had to offer was a humble career in law and two failed bids at the Illinois State Senate. Unsurprisingly, he initially wasn’t a front-runner for the Republican nomination. It was one David against three Goliaths.

However, while his rivals were overly confident and made some enemies within their own party, Lincoln remained clear and consistent in his anti-slavery stance. Instead of antagonizing people, throughout his entire career, he made friends wherever he went. His persistence and decisiveness eventually led him to victory.

Lesson 3: Because of his unusual, yet effective leadership style, even Southerners felt Lincoln’s death was a tragic blow to the reconstruction of the United States.

Lincoln’s victory in the election was a great testimony to his genius and intelligence as a politician. When it was time for him to choose the members of his presidential cabinet, he was equally as thoughtful and strategic.

Lincoln’s strategy was simple, yet unprecedented in terms of how a leader might typically make these choices. Most people in a leadership position will surround themselves with like-minded company. Lincoln, however, picked the most qualified people, regardless of their former party affiliation. This meant turning to his former rivals: Seward, Chase, and Bates.

Lincoln surrounded himself with a group of ambitious thinkers, not friends and allies who would blindly support his opinion. What he created was a powerful group of superheroes, a kind of 19th-century justice league – a team of rivals, if you will.

After four years of bloody battles between the North and South, on April 9, 1865, the South finally surrendered, ending the war. Just five days later, John Wilkes Booth fired a shot into the back of Lincoln’s head. After Lincoln died the next morning, the entire nation, including the South, had lost a valuable friend.

“Those of Southern sympathies know they have lost a friend, willing and more powerful to protect and serve them than they can now ever hope to find again.”

Team Of Rivals is a fascinating read by acclaimed historian and author, Doris Kearns Goodwin. It’s a hefty 945 pages, so if you’re not a true history buff, you’ll likely find it a bit overwhelming. However, the book’s structure makes it easy to pick and choose chapters to learn valuable lessons from history.

Who would I recommend the Team Of Rivals summary to?

The 29-year-old history major, who thinks they know everything there is to know about Lincoln, the 34-year-old District Sales Team Manager, who’s looking to build a winning sales force, and anyone who’s interested in political history and the American Civil War.