1-Sentence-Summary: The Story of Philosophy is a remarkable piece of writing that profiles the lives of great Western philosophers such as Plato, Socrates, Nietzsche, and explores in detail their contemplation on governance, religion, the meaning of life, and other philosophic concepts from their lifetime of research. 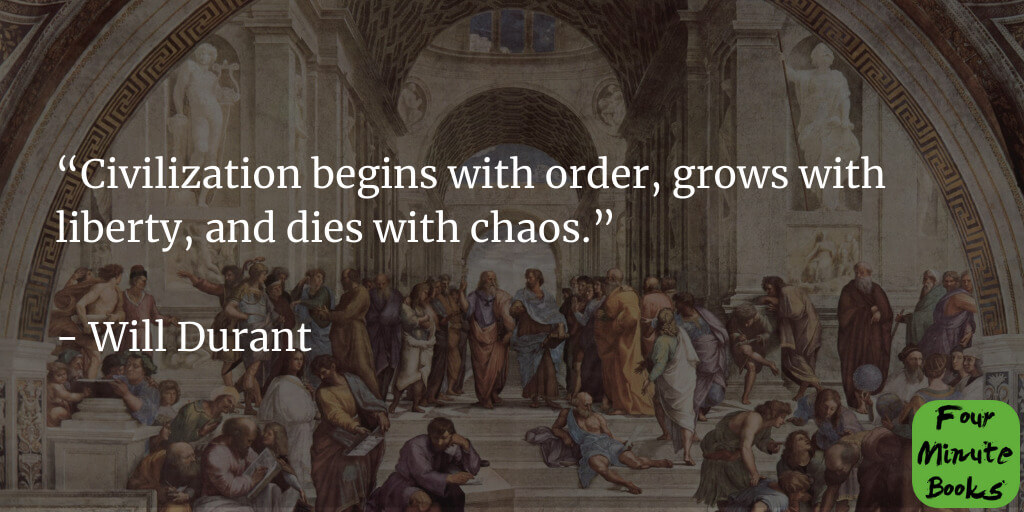 Looking back at how humanity evolved through small, incremental steps and groundbreaking discoveries altogether, we can tell that philosophy is both an art and science. Without asking ourselves what our higher purpose is, why are we living in communities governed as they are, about the meaning of life and God, and many other burning questions, where would we be now?

Probably far less evolved, living in the mundane, going through the motions. However, philosophers took these questions and turned them into answers, which led humanity further in the evolution process. The Story of Philosophy explores how thinkers like Platon or Nietzsche lived their lives in virtue and made it their mission to solve humanity’s most difficult puzzles.

There’s a great deal of lessons to absorb from the most famous philosophers around the world, but for now, we’ll focus on these three in detail.

Lesson 1: Much of humanity’s essential discoveries start in ancient Greece

Ancient Greece is widely known as the pylon of philosophical thinking and science, as the founders of such areas of expertise conducted groundbreaking discoveries in the aged poleis. At first, there was Socrates, considered the founder of Western philosophy.

Socrates first paved the way for questions related to the meaning of humankind and questioned morality, ethics, and governance rules. He believed that wise men should rule the state, such as aristocrats. In fact, his daring observations of the democratic governmental bodies won him a place in history. But they also brought him death, as he was considered culpable for the aristocrat’s coup.

After he was condemned to drink poisonous hemlock, his brilliant student Plato set up an academy of science and popularized Socrates’ principles. He also came up with the famous writing “The Republic”, which frames that opposed to a completely democratic state, people with expertise should rule a nation, in a democratic way.

People should choose their leader according to their academic performance, instead of kinship. Aristotle followed Plato and set up a Lyceum, where students would study biology and natural sciences. He discovered that reptiles and birds have similar structures and so do men and mammals. He also set the foundation for the science of logic and syllogism as a rational argument.

Lesson 2: Spinoza reformulated the meaning of religion in the ancient times

Spinoza was a Jewish immigrant who led his life in Holland after the Portuguese Inquisition in the sixteenth century. He was excellent in his thinking, and grew up to be a star student in the Synagogue. He had a passion for the Jewish culture, Descarte’s philosophy, as well as religion in general.

At first sight, his findings may reveal that he’s an atheist. However, Spinoza was always advocating for the existence of God, yet argued that we shouldn’t interpret the Bible literally. One should read through the metaphors and pick the lessons out of the stories.

He argued that God isn’t a superbeing, but rather a force of the universe, one with nature. Lastly, Spinoza claimed that there’s no such thing as free will. Humans are led by instincts of survival, and since the body and the mind are one, we are ultimately seeking to fulfill our desires, which we have no control over.

Voltaire was widely known for his controversial writings, as he was always criticizing the French tyranny and way of governance. For this reason, he was imprisoned twice, before he escaped to England. In the British territory, he found enlightenment.

He saw how the British rule freely, ports write with no restrictions, and how the authority governed the people better.  Thus, he wrote the famous Letters on the English. He firmly criticised medieval theology, the French clergy, corruption, and other philosophical concerns.

His remarks paved the way for the French revolution. Later on, his beloved lover died during labor, so he decided to retire in Switzerland. There, he wrote about more liberal ways of governance and moving past the medieval ways of thinking in religion. His ideas traveled around the world and laid the foundation of the enlightenment era.

The Story of Philosophy Review

The Story of Philosophy delves into the lives and ideas of famous personalities in history, such as Plato, Socrates, Voltaire, Immanuel Kant, and many others. The book is a compilation of philosophical concepts that traveled around the world and paved the way for the enlightenment era, new ways of governance, a stronger sense of purpose in humans, and an exploration of the meaning of life. The philosophers touched on humanity’s most burdening questions and came forth with some relative answers, which the author presents in this book.

Who would I recommend The Story of Philosophy summary to?