1-Sentence-Summary: Woke, Inc. taps into the dark secrets of the woke culture in corporate America, which organizations generate tremendous amounts of profit by hiding behind causes like social justice, gender equality, climate change, and many other popular matters. 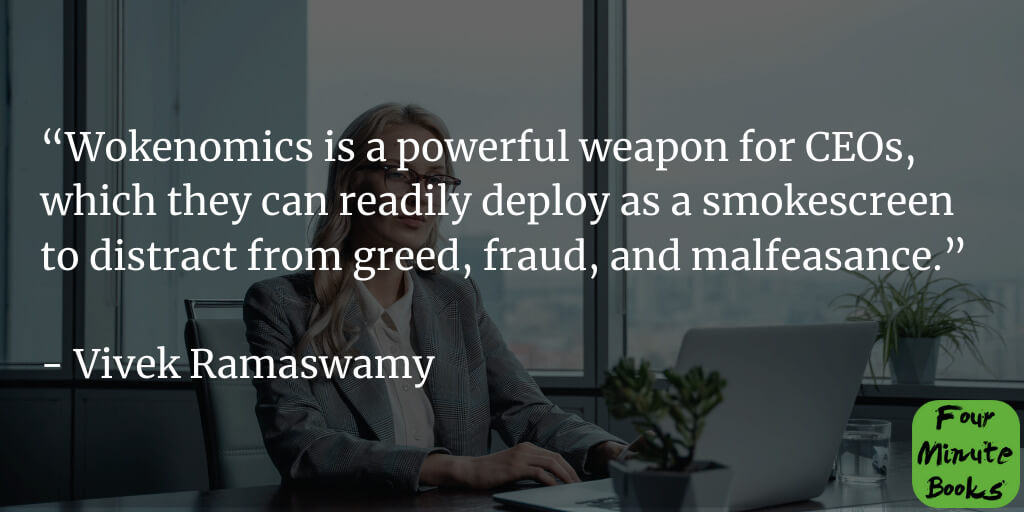 Corporations are lucrative entities, which means that by nature they pursue profits above everything else. While there are rules in place that forbid them from engaging in malicious activities, there’s no rule that forbids them from advertising and profiting off of controversial social causes.

There are companies that donate and engage with worthy causes, like ending racism or the gender gap. However, while they’re spending significant revenue on those, they benefit so much more from the public’s general opinion. Woke Inc. by Vivek Ramaswamy explores how corporations turn charity into marketing and profit off of that.

These lessons are worth exploring in-depth, as they carry significant meaning and can enlarge one’s perspective on the world we live in. As such, we’ll go further into the summary by exploring them one by one!

Lesson 1: Corporations use the woke culture to pursue their lucrative goals

It’s no secret that all companies pursue profits. However, the way they do so tells a lot about them. Big corporations have taken over the woke culture, which originated with the phrase “stay woke” used by black people to stay alert to racism in their societies. Now, wokeness is about keeping an eye open for racism, gender discrimination, civil rights, and other similar causes.

Corporations often love to put their logo on the hottest trends and advocate for honorable causes. However, instead of being genuine in their intentions, they donate prizes and create opportunities only to gain more in the end. On top of that, they use a rather “political” way of showcasing things.

Take Goldman Sachs for example – the Wall Street investment company. They recently advocated for a new policy they implemented: they’ll only take public companies that have a “diverse” board. For them, diversity meant female board members. The catch? All the companies in the S&P500 already had a female board member, so it wasn’t an uncommon thing to find that structure. Their risk was nearly zero, yet the gains were immense.

Lesson 2: Mixing politics and business is a dangerous combination for the world

Big corporations like to play safe and keep the odds in their favor. For this reason, pleasing shareholders, which is the core essence of any company, isn’t enough anymore. Stakeholders like the government, the political parties, suppliers, and the society are now among the most important external factors of influence of any company.

In order to fulfill their wishes, corporations often adhere to the woke culture that seems to have taken over the world in an over-aggressive way. Coca-Cola started holding classes about “how to be less white”, and if an employee doesn’t want to participate in it, they can expect to be fired. This organization isn’t the only one that does so, and the employees have had enough of it.

Currently, there are many ongoing trials regarding a new type of discrimination, where companies turn against people who don’t want to mix politics with business. However, in a world dominated by political parties, corporations feel the pressure of choosing a side, and sadly, being on the winning side implies bringing politics to the workplace.

Lesson 3: Corporations are hiding under false virtues while witnessing real-life crises in their face

Another way through which corporations make profits is by selling your data to larger powers, such as governments. Take Airbnb for example – the company possessed huge amounts of data from its American users. Top destinations, emails with customers, travel habits, and demographic factors of users are all in the hands of Airbnb.

To make room for business in China, the Communist Party requested that information for their own benefit. Since profits come first, Airbnb handed over those valuable insights. Then, they closed an eye to all the oppression they saw in China and never spoke a word about their own doings, all while promoting virtuous causes in the US.

Corporations act like heroes publicly, yet they have a tendency to be dictators themselves behind closed doors. Firstly, they earn users’ trust through the woke culture, then they monetize their data through ads, on top of the regular revenue gained. Selling data has become the hottest trend among corporations, and it’s taking a heavy toll on consumers.

Since profits are just part of their operations, they must also seek power to keep their status. For this reason, Big Tech controls the media and only promotes causes that help them stay in charge. Concrete examples of this behavior happened in the pandemic, or during elections.

Youtube, Twitter, Facebook, and Instagram were widely known for censoring anti-lockdown and anti-vaxx posts. Although some of them were ridiculosing the real meaning of Corona virus, some were simple opinions from users on their free speech platforms. Still, everything promoting different points of view was oppressed and deleted.

Woke, Inc. delves into the dark secrets of American corporations and exposes their true nature. Companies often hide behind woke culture and promote social causes, only to benefit more in the end and close an eye to problems that truly matter. Reading this book will open your eyes to the reality we’re all facing, whether we like it or not – corporations rule the world we live in.

Who would I recommend the Woke, Inc. summary to?

The 30-year-old person who’s passionate about politics and conflicts around the world, the 38-year-old aspiring diplomat who wants to delve deeper into American corporate philosophy, or the 40-year-old politics teacher who is a casual reader of news and important matters around the world.