1-Sentence-Summary: Own The Day, Own Your Life is a straightforward guide to maximizing your potential by optimizing your health of body and mind with simple tweaks to your daily routine. 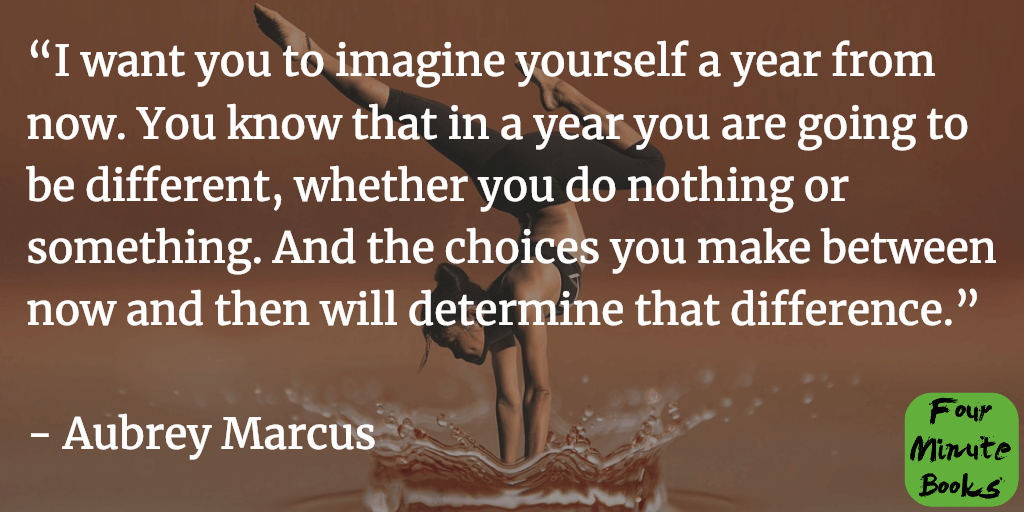 If you were in a terrible car accident that required hours of facial reconstructive surgery, how would you react? Most of us would probably spend the weeks following the event in anger, frustration, and misery. About why this happened to us. About how we’d never be the same.

Not Aubrey Marcus. After inexplicably falling asleep at the wheel of his car, his life changed forever. But he doesn’t regret the accident. He says despite it being horrible, it happened for him, not to him. In a heartfelt video, he shares everything he’s learned from the experience.

Marcus is the founder of Onnit, a multi-million dollar supplements and fitness equipment company. Since the company has found success, he’s been spending more time on creating his own brand, which includes publishing Own The Day, Own Your Life in 2018. It’s a simple, but detailed collection of small tweaks and hacks you can use to transform your day and, thus, take charge of your life.

Here are 3 valuable lessons I learned:

There are many ways most of us can improve our lives with small changes, so let’s see what tricks Aubrey has up his sleeve!

Lesson 1: Drink water first thing in the morning, not coffee.

I love coffee. It’s my and millions of other people’s go-to drink in the morning. As a writer, it’s even part of my creative routine, maybe my most important ritual. That said, for the past two years or so, I have made it a priority to drink at least one large glass of water first thing after waking up. Headache problems run in my family and this really helps.

Aubrey explains why: We lose about one pound of water each night on average because, well, we don’t drink for seven to eight hours. Of course, we’ll be dehydrated after waking up! Now, imagine you went to the gym the day before, had some booze, or live in a dry climate. It’ll be even worse.

If you don’t rehydrate before having your cup of joe, it hits the bloodstream too fast and makes you anxious instead of helping you focus. That’s why Marcus suggests: water first. If you add a squeeze of lemon and a pinch of salt, it’ll even taste awesome!

Lesson 2: Naps are the best way to improve your after-lunch productivity levels.

In Asian culture, it’s very common for employers to provide pillows and spaces so that workers can take naps after lunch. This may sound like a great job benefit, but it’s actually also a smart move. According to science, the nap is the best way to get back to being productive after lunch.

Aubrey quotes a British study from 2008, which tested the effect of caffeine vs. naps and even increasing the amount of sleep people got at night. When it came to replenishing people’s cognitive and motoric functions, nothing could beat the nap.

While history’s famous figures have always been split into opponents and defenders of sleep, modern-day entrepreneurship culture used to bash getting enough shut-eye until recent years.

Now, a big counter-movement is happening, with some of the world’s most powerful entrepreneurs, like Arianna Huffington of The Huffington Post and Jeff Bezos of Amazon, standing up for getting enough sleep – and that’s a good thing!

Lesson 3: Set exercise goals that benefit your overall health, not just one area of your fitness, to avoid causing damage.

When my doctor first told me swimming was the best kind of exercise for my strained knees, I wasn’t too happy. I thought it was the world’s most boring sport. I was also terrible at it. With time and practice, though, I came to love it.

One thing I learned was that swimming is one of the most holistic kinds of exercise you can get. According to Aubrey, this is both an important and neglected aspect of our physical health. That’s why his philosophy is called “total health optimization.”

Most of us, myself included, probably exercise too little altogether. But it’s also dangerous to zone in on just one aspect of your body once you start improving. For example, many bodybuilders are obsessed with perfecting and fine-tuning one kind of muscle, like their abs, chest, or biceps, and sacrifice other areas in the process. Often, the consequences of this only show themselves in the long run.

You might look super healthy and fit now, but if you skip leg day too often, you’ll surely regret it later. So don’t just set narrow goals for your exterior and fitness. Make sure each target is part of the bigger picture that is your overall health.

Own The Day, Own Your Life Review

Own The Day, Own Your Life is simple, but not overly simplistic. It’s packed with evidence as to why the tactics presented work and enough context to help you implement them in your life. Marcus acknowledges that not everything will work for everyone, so you’ll still have to choose and try, but I’m sure most people can find at least several points worth testing in this book.

Who would I recommend the Own The Day, Own Your Life summary to?

The 32 year old consultant, who mostly runs on coffee and suffers frequent headaches, the 37 year old branding specialist, who’s always tired after lunch, and anyone who mostly hits the gym to look good.