1-Sentence-Summary: Capitalism And Freedom helps you understand some of the most important factors protecting your liberty by outlining the government’s role in economics and how things go best when political entities are small and stay out of the flow of money in a country. 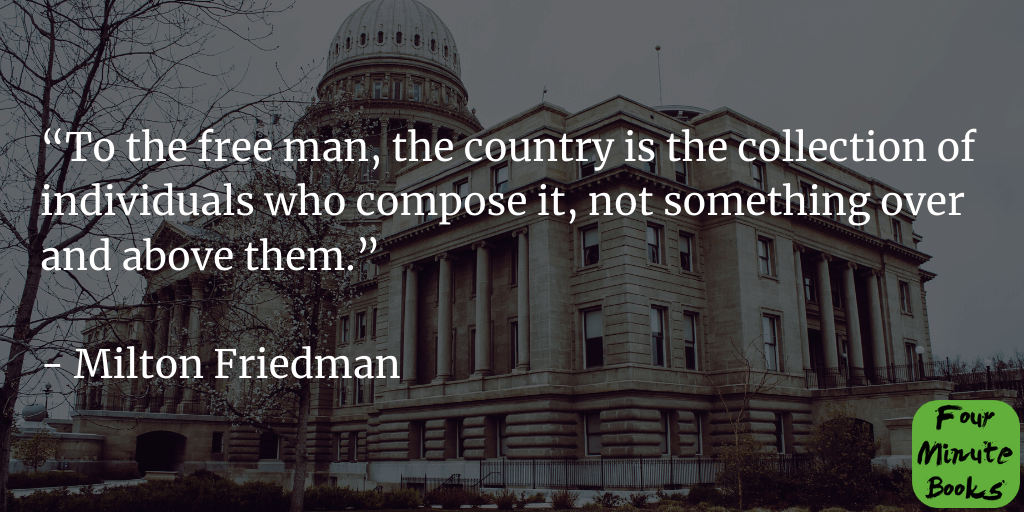 The smashing victory of the West’s capitalism over Soviet socialism in the Cold War cemented it as the leading system. Government leaders and scholars both agreed that this was the way to go. In the words of Margaret Thatcher, “there is no alternative.”

But now, in the wake of the 2008 financial crisis, politicians and citizens are questioning whether the risks of this economic standard are worth it. On the other hand, the tenets of communism are back on the rise.

Milton Friedman, author of Capitalism and Freedom: A Leading Economist’s View of the Proper Role of Competitive Capitalism, would have been worried about all of this. In this book, Friedman teaches the benefits of capitalism. He also reveals how monopolies, poorer living standards, and inequality all result when politicians get too involved in the economy.

Here are the 3 most important lessons I got out of this book:

Are you ready to learn some important lessons about capitalism and freedom? Let’s begin!

Lesson 1: Decreasing the size of government and decentralizing it will help keep political and economic freedom strong.

In school, we learn that economics and politics are two separate subjects. When we talk about economics, we mean material comforts, and political lectures are all about freedom for individuals. Logically it would then make sense that you can have any political and any economic system and they’ll work out well together.

But in the real world, things don’t work that way. At least not for the benefit of people. Just imagine trying to mix the state-led ways of the Soviet Union with the freedom-centric government of the United States. It wouldn’t go over so well.

That’s because these two seemingly different pieces that comprise how our world works are actually interdependent. In other words, anything you do to one, good or bad, will affect the other.

Take a British person who wants to visit America after World War II. After planning his vacation he realizes that because of the way his government controls the economy means the pound is worth less than the dollar. He can’t afford to go anymore.

Or consider the situation fo an American that would like to visit the Soviet Union. They would have a hard time doing so because of the US’s pro-capitalist stance.

Both of these cases identify how socialist and communist viewpoints limit individual freedoms.

That’s why we need free-market capitalism. In this system, the government’s place is limited. Its primary purpose is to uphold the law and keep order rather than meddle with people’s freedoms. When this goes right, the market takes care of letting people have the freedom to buy, sell, and live as they please.

Lesson 2: Politicians like to think they’re going to improve the economy when they mess with it, but they only make things worse.

One thing that proponents of big government like to argue about capitalism is its riskiness. Crashes like the Great Depression and the recession of 2008 are examples. These people believe that politicians need to oversee the economy to make sure it doesn’t head for crisis when left to its own devices. But this kind of thinking comes from bad economics.

Let’s examine the origins of these ideas to understand them better. After the Great Depression, economists started to propose that the feds spend more to correct market changes and keep things stable.

This comes from a theory of a British economist named John Maynard Keynes. He believed that each time the government spends a dollar, it makes another dollar available for citizens to spend. But his thinking was flawed and this isn’t the way the real world works.

These stimulus packages are inhibited by the lengthy process of getting anything through the governmental process. It just takes too long to implement them. By the time that they do become active, whatever crisis they were trying to avert is over. The people then have to pay taxes to cover something that’s only taking money out of the system.

It’s also extremely difficult to accurately predict what such a large population is going to do with an economic boost. In the Great Depression, for example, government intervention resulted in people just trying to save their extra money rather than spend it!

Lesson 3: Social welfare systems don’t work and we should replace them with a negative income tax, among other things.

A lot of the reason we even have social welfare programs is to try to reduce inequality. Unfortunately, they too often fail at this and other purposes. Frequently they end up hindering equality rather than helping it.

Public housing is a perfect example of this. Beurocrats who don’t know what they’re doing run it, usually into the ground. They decrease the general housing supply and only confine the poor to having to live in unsafe areas. The invisible hand of the market, on the other hand, would ensure maximum efficiency all around.

Social security is another significant problem when it comes to the state intervening in money issues. These days most American’s know they’re not even going to see a penny of it by the time they retire. This system just ends up becoming a redistributive tax because of the greater amounts that the rich will pay over their lifetimes.

It’s also far too paternalistic. Think of it like the government not trusting people to be able to save enough for retirement without help. That just sets people up to become dependent on the state, which just fails them in the end anyway.

The author proposes that we instead implement a negative income tax. First, we should do away with ineffective government welfare programs and their departments. Then, anyone that couldn’t reach a minimum level of earnings would get federal financial aid.

Capitalism And Freedom brings up a lot of important points in the debate between free-market capitalism and more regulated economic systems. I think that we still need more research to determine what the best path forward in all of this really is. All in all, I did like this book and I think that society can’t ignore these ideas whatever way we choose.

Who would I recommend the Capitalism And Freedom summary to?

The 39-year-old with an interest in politics and capitalism, the 22-year-old who is taking an economics class, and anyone that is curious about the benefits of free-market capitalism.