1-Sentence-Summary: Who Moved My Cheese tells a parable, which you can directly apply to your own life, in order to stop fearing what lies ahead and instead thrive in an environment of change and uncertainty. 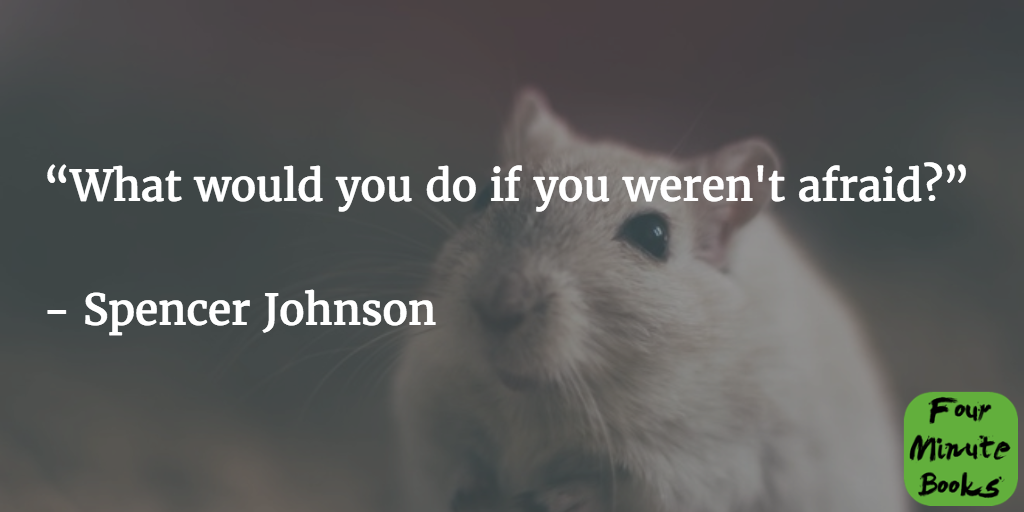 Funny, how you sometimes stumble into things that were right in front of your nose, all along. I’ve had this book for 10 years. When I was a kid, my uncle gave it to me, it was a leftover copy from somewhere. I briefly looked at it (it was still wrapped), thought it was a “manager’s book” and put it away. I distinctly remember the picture of the cheese slice on the cover, and turned it in my hands a couple times since. Sadly, I never felt intrigued enough to read it. What an idiot I was!

This site would probably have existed 5 years earlier, had I read it back then. But there’s no use in crying over spilled milk, so I’ll just make do with what I’ve got and share some of Spencer Johnson’s great lessons about change with you right now. Who Moved My Cheese a parable about two little people and two mice in a maze, searching for cheese, where each character represents a different attitude towards change, with cheese being what we consider success.

Here are 3 lessons about cheese and what you should do when someone moves yours:

Are you ready to become a champion of change? Let’s look for that cheese!

Who Moved My Cheese Summary

Lesson 1: Stop thinking too much about your cheese and start chasing it.

The two mice inside of our maze are Sniff and Scurry. They spend most of their time running up and down the corridors of the maze, looking for cheese. Turn a corner, run to the end, see if there’s any cheese, and if not, turn around and go back. That’s their pattern, and, while it seems kind of mindless and unstructured, it actually saves them a lot of time and energy.

Hem and Haw, two little people, also spend their days in the maze looking for cheese, but not because they’re hungry – they think finding it will make them feel happy and successful. However, because of their complex brains, they think a lot about

…and of course, they wonder if there even is any cheese in the maze at all every time they turn another empty corner.

Life is the same. Every minute you spend wondering what success looks like, how to get it, whether it’s possible and how you’ll feel in the future is a minute not spend working towards it. Humans are complicated beings, but that doesn’t mean we have to make everything complicated.

Be more like a mouse and just start running!

Sniff and Scurry soon found a big stash of cheese at Station C, and even though they enjoyed snacking a bit of it every day, they kept paying attention. The amount of cheese kept declining, slowly, but steadily, every day. Once they realized they were about to run out, they decided to move on of their own accord and soon found another huge cheese at Station N.

When Hem and Haw found station C, however, they settled there, and quickly grew accustomed to the new status quo. The cheese fest they indulged in every day soon became the center of their lives, as they thought it was the fair reward for all their hard work. They were so preoccupied with the cheese that they didn’t notice how it was disappearing, one piece at a time, and how some corners of it even got moldy. One morning, they woke up, only to find someone had moved their cheese.

This left Hem and Haw sad, depressed, feeling treated unfairly and in denial. Instead of venturing out to find new cheese, they kept returning to Station C, getting ever hungrier and weaker.

No supply of cheese can last forever. Change is always bound to happen, sooner or later. Instead of fooling yourself that things will stay the same forever, always keep an eye open for change.

The best part about cheese isn’t that once you’ve found it you’re set for life. It’s that there’s always more cheese to be found. Haw eventually got sick of sitting around, so he decided to go looking for new cheese all by himself.

Once he started moving, his situation instantly got better. Yes, he just found a few bits and pieces of cheese here and there at first, but this was a lot better than doing nothing and being paralyzed by fear. After having found the courage to move on despite your fears once, fear’s grip on you will never be as strong as it used to be.

Haw realized the accumulated fears in his mind were a lot worse than even the biggest challenges he encountered. Full of confidence, he kept exploring the maze, until he eventually found Sniff and Scurry at Station N, where the three of them shared the new cheese they had found.

Who Moved My Cheese Review

This is a great book. I love stories like these. It is a management book, and many a manager has told this story to his team to inspire them, but it’s just as valuable for you as an individual.

It describes a simple pattern of embracing change, finding success, looking out for more change and then embracing it again, which will help you cultivate a much more optimistic attitude about life. A really cool book!

Who would I recommend the Who Moved My Cheese summary to?

The 15 year old, who got this book from a relative, but has never touched it, because he thinks it’s “just a business book”, the 32 year old accountant at a big corporation, who sometimes feels her drive for change is nipped in the bud, because structures are rusty, and anyone who likes Stuart Little.

Rate this book!
This book has an average rating of 4.3 based on 55 votes.