1-Sentence-Summary: The Lucifer Effect is a book by Philip Zimbardo that explains why you’re not always a good person, identifying the often misunderstood line between good and evil that we all walk by uncovering the shocking results of the authors Stanford Prison Experiment and other cases that show how evil people can be. 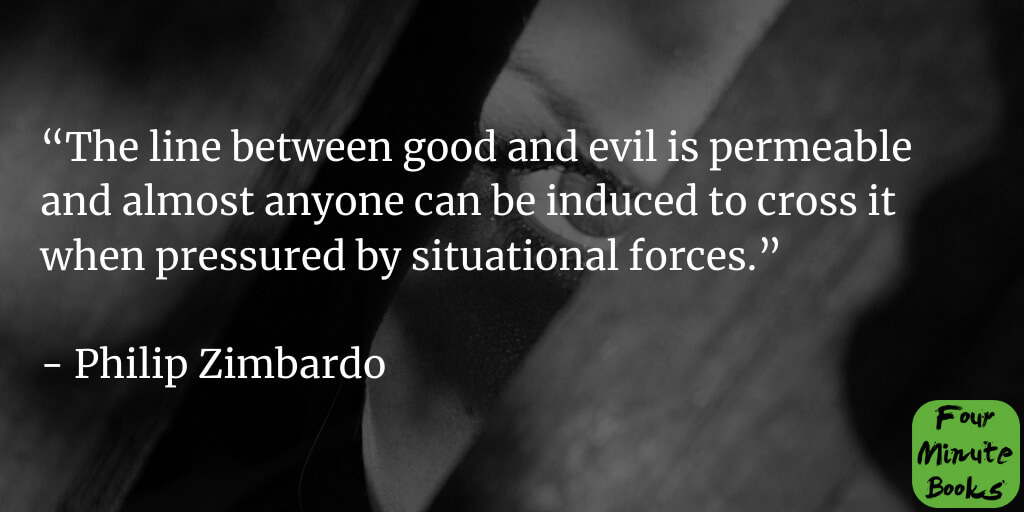 Odds are, you’ve probably at least heard of the biblical story of Lucifer. According to the Bible, he was one of God’s favorite angels. But he rebelled and God punished him by sending him to hell. It was there that he became Satan, who personified all things evil.

But why does this happen? Renowned psychologist Philip Zimbardo explores this phenomenon in his book The Lucifer Effect: Understanding How Good People Turn Evil. Using historical examples as well as his own research, he explains what seduces people into doing shocking things.

Zimbardo shows us how formerly good, upstanding men and women can become monsters by situational forces and group forces that work together. However, he reassures us that even though we are all capable of terrible things, we have the power to teach ourselves to act heroically instead.

Let’s get right to the bottom of these interesting lessons in human behavior!

Lesson 1: If you think you’re always the same person in every situation, you’re wrong.

Your character is changeable. How you behave depends heavily on the social circumstances you’re in. This is the situational approach to understanding human behavior. It argues that what you do depends on the situation you’re in.

The famous Milgram experiment illustrated this. In the experiment, participants were told they were part of a study to improve memory. Subjects were told they would be in the role of a “teacher” whose job was to help the “learner,” who was an actor in a concealed room, memorize word pairs.

Every time the learner made a mistake, the teacher could push a button to punish them with an electric shock. For each additional mistake, the shock intensity was increased. As the voltage increased, the learner would act more and more distressed and in pain and made more mistakes.

Despite the fact that the learner seemed in distress, most teachers kept on increasing the shock level. Those that started to become reluctant were told it was part of the rules. In the end, 65 percent of the participants gave the learner the maximum, life-threatening amount of volts.

The participants weren’t all bad people, but this showed that under certain circumstances, ordinary people could do horrible things.

Lesson 2: Regular people can turn bad rather quickly, as proven by the Stanford prison experiment.

The Stanford prison experiment also showed how quickly ordinary people can do cruel things. The author himself conducted this experiment while at Stanford Univerity. The idea was that he would put students into a mock prison and study their behavior.

Zimbardo made sure that all of the participants came from similar middle-class backgrounds and had no record of psychological impairments or criminal behavior. Some were assigned to be guards and others were prisoners.

The guards were given uniforms and wooden batons, and the prisoners were stripped naked, given a number instead of a name, and placed in a small cell. But what was shocking was how quickly this experiment got out of hand. Not long after it began, a prisoner disobeyed a guard, who retaliated by attacking him with a fire extinguisher.

The experiment was supposed to be two weeks, but for obvious reasons, it had to be called off after just six days. Under normal circumstances, these students probably would never act this cruel and sadistic, making the results of this experiment shocking.

You may be thinking now that we are all evil deep down and there is nothing we can do about it.  But Zimbardo teaches that because our capacity to do wrong depends on our situation, there are things we can do to resist it.

First, practice being responsible for all of your decisions. Even if no one is watching. Just because someone doesn’t know it’s you under your hat and sunglasses, it doesn’t make you any less responsible for your actions.

Second, if there is an authority who you feel is being unjust, stop following what they say. Just like there were Milgram participants who refused to give shocks even when authority figures told them to, you can find it in yourself to say no if you don’t feel something is okay.

Lastly, question the ideology that justifies actions. For example, if the purpose of invading a territory is to bring democracy and freedom, consider whether the actions will actually advance this cause.

Zimbardo teaches that we can be a hero by not just resisting evil but working for good. The two main characteristics of a hero are that they are active when others are passive and they put others before themselves.

What an interesting concept! It’s honestly one I hadn’t really thought about much before but now that I know about it I’m glad that I do. I think everybody should read The Lucifer Effect at some point in their lives so they don’t fall prey to thinking they’re perfect.

Who would I recommend The Lucifer Effect summary to?

The 65-year-old that wonders why their children have done horrible things, the 24-year-old with an interest in psychology and human behavior, and anyone that’s curious why even some of the best people in the world turn evil.

Rate this book!
This book has an average rating of 4.3 based on 12 votes.