1-Sentence-Summary: The Secret is a self-help book by Rhonda Byrne that explains how the law of attraction, which states that positive energy attracts positive things into your life, governs your thinking and actions, and how you can use the power of positive thinking to achieve anything you can imagine. 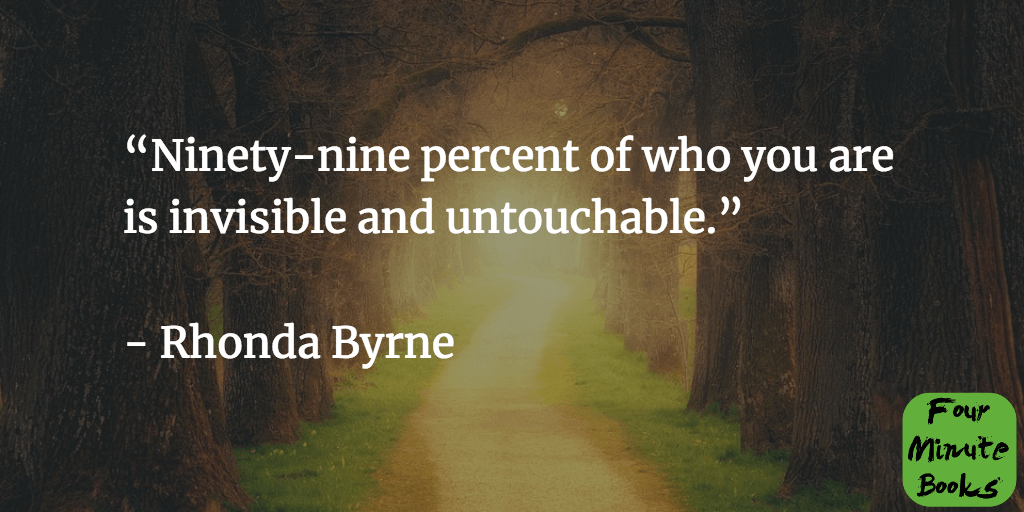 Have you ever set an outrageous goal, never looked at it again, and later realized you’ve already accomplished it?

This once happened to famous talk show host Oprah Winfrey. She read a book called The Color Purple and immediately recognized herself as destined to portray one of its characters in a big Hollywood movie. Miraculously, she got a random call to audition for a secret movie, which turned out to be… The Color Purple. However, when she didn’t hear back for months, she let go of the idea. Right then, she received the call from Steven Spielberg.

That was in 1984. For the next 20 years, Oprah couldn’t quite explain how she’d managed to turn this fantasy into reality – until author Rhonda Byrne told her about The Secret. This global bestseller has sold almost 30 million copies. Millions of people consider it the perfect blueprint for achieving your goals. Today, we’ll analyze it.

Here’s the essence of The Secret book in 3 lessons:

Do you have a big, crazy vision? Here’s how to prime yourself for achieving it.

Lesson 1: One of the strongest rules in life is the law of attraction.

While Byrne packaged the idea in a new way, which appealed to the masses, the law of attraction itself is as old as we are: like attracts like. In Germany, we have a saying: “As you shout into the woods, so they echo back.” In essence, the law of attraction states that what you think and feel determines what you’ll attract into your life.

The concept has been written about as long as self-help books are a thing. The Alchemist by Paulo Coelho, for example. Rhonda herself first found it in The Science of Getting Rich by Wallace Wattles. They all describe the same thing in different forms. Let’s say you focus on all the negative feedback you get as an artist. In doing so, you’ll encourage more criticism. Similarly, a person who hates money will never become wealthy, and so on.

What the book is often criticized for is its overemphasis on the power of the law. While there is a concept in psychology called priming, that shows we intuitively act based on influences, you can’t live your entire life this way. So yes, it’s important to put yourself in the right state of mind to achieve your goals, but that alone won’t cut it.

Lesson 2: The law of attraction only works when you think in positives, not negatives.

Another case study of the law of attraction is Jim Carrey, who, funnily enough, discussed his experience with Oprah in 1997, also before she knew about The Secret. As an aspiring actor, Carrey would stop on his drive home every night, think about his future accomplishments and visualize them. He took comfort in the fact that he “[did] have these things, I just don’t have a hold of them yet, but they’re out there.”

He even wrote himself a check for ten million dollars and post-dated it 5 years. Lo and behold, he did end up making the sum from Dumb and Dumber, just around the deadline. What’s remarkable about the way Carrey did it is that he always envisioned the positives that would come into his life, rather than the negatives he was trying to avoid.

When it comes to our internal monologue, loss aversion is a powerful driving force. We’re a lot more worried about losing what we have, rather than getting what we want. That’s why most of us subconsciously play not to lose, instead of playing to win. In part, this is why people who take more risks have less competition. Fewer people shoot for great than for average.

Plus, if you’re trying to convince yourself, framing something as a win sounds more inspiring than driving yourself with fear.

Lesson 3: To manifest your dreams, you must ask, believe, and then receive.

Besides regularly thinking about your goals, visualizing them, and framing them positively, Rhonda suggests an actual, three-step process you can use to make the law of attraction work for you:

Again, I’m all for planning, being motivated, and believing in yourself. However, the one big caveat to all this is that your actions have to back up your state of mind. As Gary Vee says “the law of attraction only works if you do.” So think positive thoughts, prep for success, pay attention, and then work like a madman to get what you want.

They say the best books split the audience, and this one definitely does. Some people swear on it like gospel, others dismiss it as feel-good mumbo jumbo. I think the truth is, as so often, somewhere in the middle. Yes, the power of positive thinking works, but only to an extent, and it’s not the be-all, end-all. Read The Secret, but take it with a grain of salt. Reflect on it, and then come to your own conclusions about it.

Who would I recommend The Secret book summary to?

The 29 year old local news anchor, who thinks her career is ‘ruined’ because she’s not at a big station yet, the 43 year old actor, who’s been fighting his way through Hollywood for two decades now, and anyone who’s easily excited by new ideas.

Rate this book!
This book has an average rating of 4.5 based on 59 votes.