1-Sentence-Summary: So Good They Can’t Ignore You sheds some much needed light on the “follow your passion” myth and shows you that the true path to work you love lies in becoming a craftsman of the work you already have, collecting rare skills and taking control of your hours in the process. 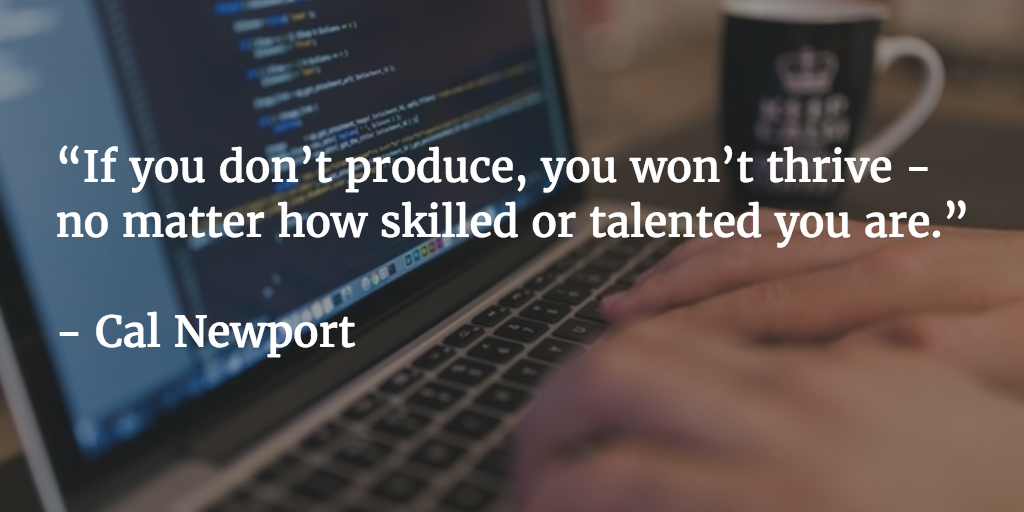 The best non-fiction books are usually the ones where the author solves his or her own problem. This is exactly what Cal Newport did.

After developing a new mindset about work and passion to figure out his own career problems, he wrote down the entire concept in So Good They Can’t Ignore You, published in 2012.

Here are 3 lessons from the book whose title is entirely based on a Steve Martin quote:

Ready to let your passion find you? Let’s go!

Lesson 1: Don’t do what you love, but learn to love what you do.

When finding himself having to decide between a job at Microsoft, a professorship at Georgetown University, and a career as a full-time writer, Cal didn’t deliberate anxiously for weeks, which is what most people would have done, in order to not choose the wrong one.

Not buying into the myth that he had only one true passion to follow, in which he would flourish, he knew that he would eventually come to love any of the three.

Cal says that whether you love your work or not is mostly based on expertise and experience.

He knew that all three career paths would start out rough initially, but that as long as he worked hard, practiced a lot and kept acquiring new skills, he’d eventually learn to love his work – so he just picked the one where he liked the location the most and could stay close to his girlfriend, the professorship.

That’s because according to self determination theory, intrinsic motivation, which we often connect with passion and being satisfied at work, comes from three things:

That means as long as you work hard and eventually become a master of your craft, you can thrive and learn to become passionate about any job you choose.

Lesson 2: Become a craftsman to collect the skills you need.

The likely reason why 43% of Americans are unhappy at their jobs, is that they constantly ask themselves what they want, instead of asking “What value can I bring to my job?”.

Once you start listening to Steve Martin and try to “be so good they can’t ignore you”, you’ll be so busy trying to deliver quality work that you won’t even have the time to deliberate what your true calling is.

Speaking of deliberate: Deliberate practice is the way to develop the autonomy and competence you need to boost your intrinsic motivation levels.

It’s the kind of practice that keeps you in a state of flow, where your work is hard enough to make you uncomfortable and forces you to learn, but not so much that frustration wins you over.

When you become a craftsman you’ll seek out those problems at work which you can almost solve, but not quite. This will help you focus on developing new skills while staying motivated, until you eventually become such a master that you’ll begin to love your work.

Lesson 3: Consider saying no to a raise to keep your control.

In the course of becoming better and better at work, you’ll probably be awarded with more responsibility and autonomy as you go along.

This is great, because when you get to make your own hours, or spread a project over 6 months in any way you like, you’ll feel competent and more motivated.

But the next trap will be leaking just around the corner, because as soon as you gain more control over your time and work, someone will try to take it from you.

Sometimes this happens violently, like when Steve Jobs was degraded and assigned a dead project (the Mac, hmm…), but most times, it’ll be even worse.

A shiny reward will be dangled in front of you, like a company car, a raise or a promotion.

Don’t give in to the temptation!

You have worked long and hard to gain the control you now love so much, so don’t trade it for more money.

Saying no to a raise will not only let you keep your hard earned control, it’ll probably earn you the respect of your coworkers and bosses as well.

So Good They Can’t Ignore You Review

I remember loving the term “craftsman mindset” when I first read the summary of this book on Blinkist. Don’t we all want to be someone who crafts things? It’s easy for me to work and stay motivated – I know I love writing. But that also means I can get carried away and puzzled at others who haven’t found their passion.

Yet, my advice has always been similar to Cal’s – stop thinking and start creating. There rings so much truth in this book, which will not only make you feel less pressured but also get your butt in gear. I keep re-reading parts of it every now and then because it just takes a while until you’re…So Good They Can’t Ignore You.

Who would I recommend the So Good They Can’t Ignore You summary to?

The 25 year old recent graduate, who is faced with seemingly difficult career choices to make, the 35 year old, who wonders why she feels worse after her raise, and anyone who doesn’t spend part of his or her time creating just yet.