1-Sentence-Summary: When Bad Things Happen To Good People explains why even the best of people sometimes suffer from adversity, and how we can turn our pain into something meaningful instead of lamenting it. 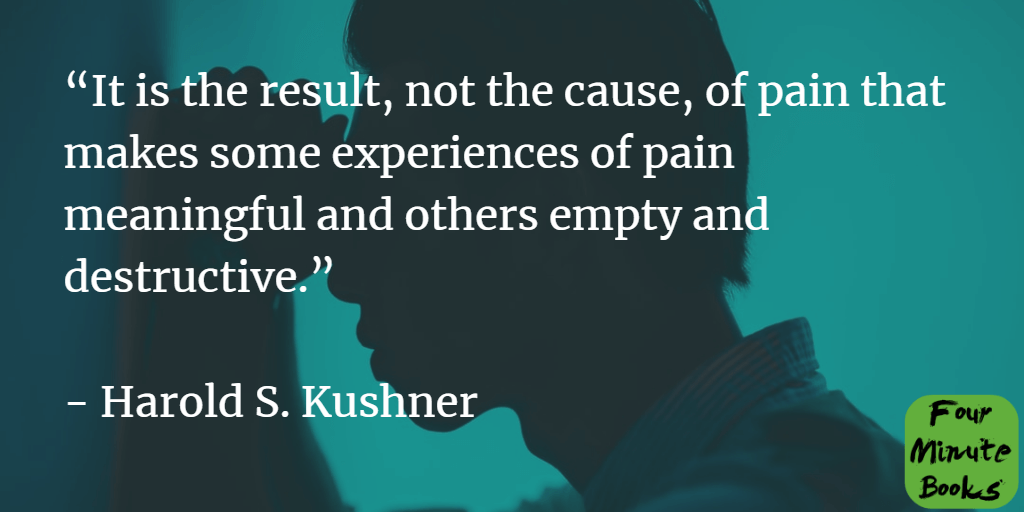 What do you do when you get less from life than it seems you deserve? It’s tempting to wallow in self-pity, anger, resentment, or jealousy.

On top of all those negative emotions, misfortune also encourages people to lash out at God. Some even decide he must not really exist. After all, if God were really so powerful and loving, he would protect good people from having bad things happen — but, all too often, he doesn’t.

This is a simple and powerful train of thought. But according to Rabbi Harold S. Kushner‘s claims in his book When Bad Things Happen to Good People, it’s simply not true. Efforts to find the specific reason that a bad thing happened are often counterproductive. We don’t even need those answers to rise above our pain.

If you haven’t dealt with real tragedy yet, unfortunately, you probably will — so let’s take a moment to remember the following lessons.

Lesson 1: People often don’t get what they deserve.

Rabbi Kushner knows it all too well that bad things can happen to perfectly innocent people. His son Aaron was diagnosed with an incurable disease as a toddler. The boy suffered from the effects of premature aging for a decade and died at just 14 years old.

Why didn’t the devastating loss of his child destroy Rabbi Kushner’s faith? He realized that God just can’t step in all the time to bend the laws of nature and protect individuals from harm.

Our bodies break, sometimes in unpredictable ways, but they also give us life. Flowing water can sweep away a house, but it also carries hydration all around the world. Gravity can cause a rock to fall on your head, but it also keeps your feet on the ground. Humans wouldn’t be able to get around, build things, or make plans for the future if our physical habitat displayed no regularity.

Maybe an all-powerful God really does loves us. Maybe these earthly realities force him to not intervene all the time in human affairs. And if there’s no God at all, then it’s obvious that laws of nature apply to the good and bad equally.

Lesson 2: Don’t listen to people who try to explain misfortunes.

It’s deeply comforting that God, karma, or natural laws deliver each person what he or she really deserves. Plenty of non-religious people believe this, on some level.

Maybe you’re ready to swallow this bitter pill about life. But just because you accept that there’s no comforting connection between deservingness and outcomes doesn’t mean that everyone else will.

Bystanders often say things to a person in pain like “everything happens for a reason” or “what doesn’t kill you makes you stronger.” They usually mean well, but these expressions can hurt more than they help. What’s the “reason” for your pain, then? What if you didn’t want to be stronger, you would prefer to have your loved one back?

Try to understand that everyone’s grappling with life’s difficulties in her own way and at her own pace. When others thoughtlessly imply with cliches that you’re to blame for all your own problems or that they have some deep meaning, you don’t have to believe it!

Lesson 3: The meaning of pain comes from what you do with it.

If bad things happen due to bad luck, not by God or karma, then what are we supposed to do about it? Instead of raging at God, are we just supposed to dwell on our unluckiness?

It’s tempting to wonder about and even research the causes of our misfortunes. But answers don’t take the pain away and they aren’t always available. We don’t know why exactly someone developed a rare type of cancer, or why that car skidded off the road just where it did.

We do know that people in pain can use our support, and so it’s better to focus your emotional and physical energy there. The urge to “do something” persists, and it can be channeled for good. Behind every tragedy is someone suffering who could use a shoulder to cry on, a hot meal, a kind word, even just an “I was thinking of you” today text message. There’s actually plenty we can do to respond to tragedies moving forward when we stop idly wondering “why.”

As a man of faith, Kushner thinks that people rise up to withstand suffering with God’s help. Maybe they can rise above these sad occasions all on their own, too. There doesn’t have to be a good or knowable reason for each problem with face in order for us to move forward from them wisely.

Best-selling books are often shallow, so I felt suspicious about When Bad Things Happen to Good People because it’s sold over 4 million copies. Can the type of book that people impulse-purchase in an airport really teach you anything important about life? I have to admit that the crowd was right this time, this book is a great read that I highly recommend.

Who would I recommend the When Bad Things Happen To Good People summary to?

The 70-year-old man whose friends from church have begun to die, the 27-year-old atheist who doesn’t understand how anyone can maintain belief in a benevolent creator, and anyone who’s trying to face pain and suffering with their sanity intact.

Rate this book!
This book has an average rating of 4.6 based on 22 votes.