1-Sentence-Summary: The World Without Us imagines planet earth without us humans, detailing what will happen to nature and man-made creations long after we’re gone. 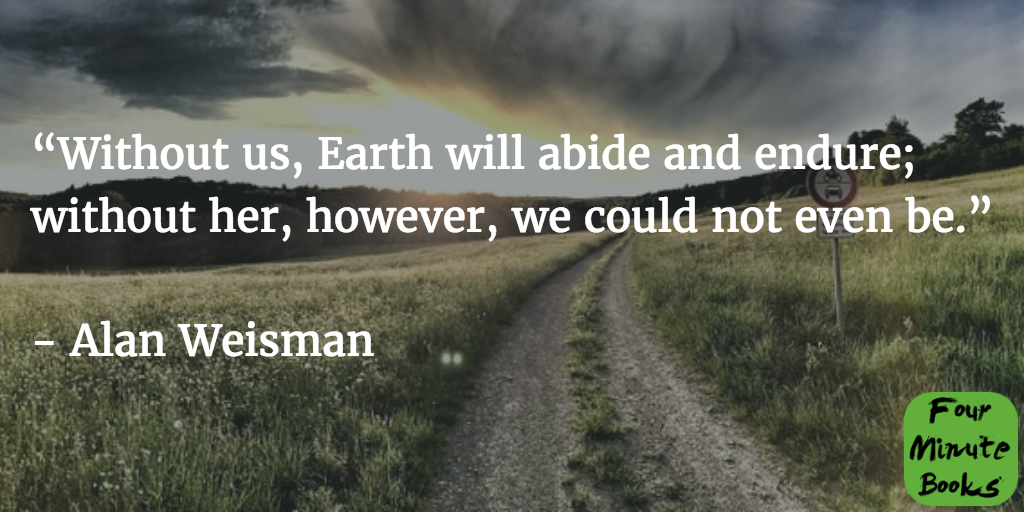 You’ve seen at least one movie that could be based on this book. A movie like I Am Legend, Planet of the Apes or The Day After Tomorrow, where the world as we know it ends and nature takes over. This book mulls over what our earth would look like, if this were to actually happen – you know, minus the zombies and artificial intelligence.

Alan Weisman is worried about our future too. With the help of his thought experiment in The World Without Us, we can draw some important conclusions on how our behavior must change for us to have one. What would happen to animals, plants and all of our man-made creations if all human being disappeared over night? A whole bunch of things.

Ready for a trip around the world without us? Let’s go!

Lesson 1: Since plastic doesn’t biodegrade, it’ll be around forever.

Ashes to ashes. Dust to dust. Usually everything that comes from nature is returned back to it eventually. When we die our bodies decay and even our bones eventually disintegrate and become part of the soil again. However, we’ve managed to create an exception.

Something we humans invented only 70 years ago, but that cannot possibly be biodegraded by nature and turned back into its original form: plastic.

Plastic cannot be broken down by microorganisms over time and therefore, will leave an impact on nature forever.

Rain, wind and the oceans can erode plastic, just like rocks, but that only makes it smaller, not disappear. Eventually, all plastic will be crushed into tiny particles and fibers. Nevertheless, these will stay around, letting plastic reach places its never gone before, thanks to the wind and water carrying it everywhere.

Scientists have verified this by feeding such tiny particles to bottom-feeding worms. They usually feed on organic material, but all of the plastic particles passed right through their digestive track and came back out with no effect or harm done.

Eventually, even plankton will be able to “eat” plastic, but it’ll stay around forever. With over 5,000 factories to produce nothing but plastic bags just in India, we’d do well to think about when we really need to use them.

Lesson 2: Predators will rise again and domestic farm animals will be their lunch.

We’ve drastically changed the world of animals as well. Many animals once prevailing in only small quantities now count billions in numbers, mostly for the purpose of serving as our food. Cows, pigs, chickens, fish, dogs, all have been domesticated and thrive under human protection.

But what if we were gone? A lot of these domesticated animals would starve, simply because they have no idea how to survive without human help. More importantly, almost none of the animals we domesticate are predators, which are outnumbered right now.

If you know anything about economics, a large supply of helpless prey will create a large demand for predators, so wild animals are likely to roam the streets, farms and cities. Without humans holding back the carnivores and protecting the animals they prey on, endangered species like tigers, lions, crocodiles, bears and even komodo dragons will explode in numbers.

Only for a while though. The large imbalance would be countered by another imbalance in favor of the predators, until the supply and demand of predators and prey evens out again.

Nevertheless, we’d see far more predators and carnivorous animals than today (or rather wouldn’t see, because we’re not here any more).

Lesson 3: Only a very small number of human creations will last for the following millennia.

We like to think that the things we create are of substance and will last a while, whether it’s the impression of an event we put together for work, an article we write, or a new, pompous building. Yet, when we look at the half-life of most of these things, they become laughable in the context of history. Especially imagining we wouldn’t be there to maintain them.

Most buildings, even skyscrapers, for example, are mere constructions of glass, steel and concrete, all of which will be withered away by water and wind in a few decades.

There are some exceptions though. The Great Pyramid of Giza, for example. It was built over 4,000 years ago and remained the tallest man-made structure for around 3,800 of those. That’ll last a while, even after we’re gone. Most other things that will include noble materials like gold, platinum or copper.

Like the Statue of Liberty, for example. It’s made from copper, which means it won’t react with salt and oxygen, as iron does, and can therefore live on for a few millennia.

The same goes for other things carved in stone, like Mount Rushmore in South Dakota. Granite erodes very slowly – just a few centimeters every 10,000 years. Geologists thus expect the monument to last over seven million years.

The next time you’re trying to build something or leave a legacy, think 10x bigger and ask yourself if it’d survive even our own extinction.

The World Without Us Review

The World Without Us is not a book for environmentalists. It’s a book for optimists. And careless people. If you’re trying to do something that makes the world a better place, this’ll help put your work into perspective. If you don’t care, then maybe you will now. Definitely worth picking up.

Who would I recommend The World Without Us summary to?

The 19 year old environmentalist, who spread flyers at her school about living more resourcefully, the 28 year old, who lives every day as if it was his last, because he thinks life is too short not to have fun, and anyone who frequently buys plastic bags when getting groceries.