1-Sentence-Summary: The Secret Life of Pronouns is a collection of research and case studies explaining what our use of pronouns, articles, and other style words can reveal about ourselves. 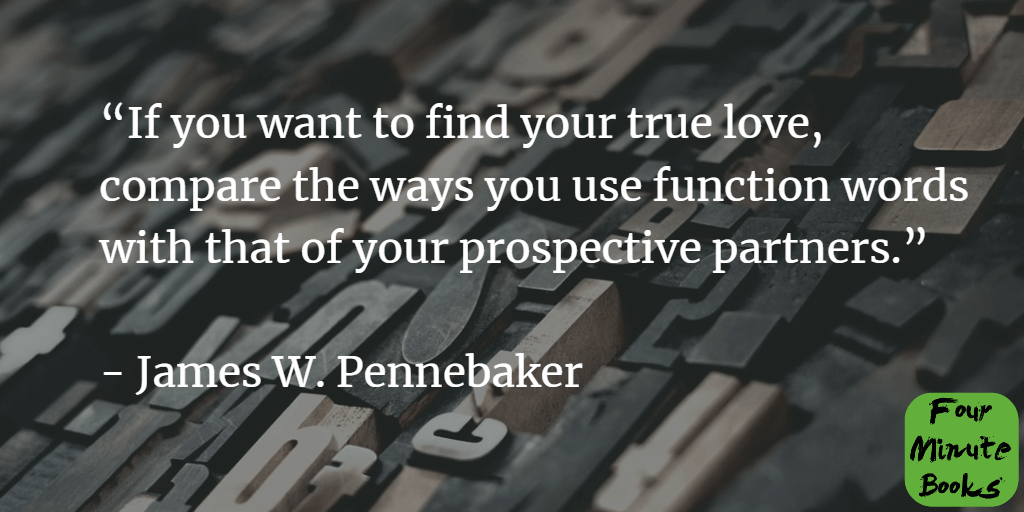 We all know that the language we use shapes our reality and perception. The framework in which we express ourselves naturally guides our ways of thinking and understanding the world.

However, our internal world is also more reflected in our word choice than we may think. James Pennebaker proves that beyond doubt in his book, The Secret Life of Pronouns: What Our Words Say About Us.

When Pennebaker first began researching what our choice of words says about us, his focus was on how the use of positive and negative words is a reflection of mental health. He employed a dedicated computer program to help him count the specific content words like nouns, verbs, adjectives, and adverbs, and then use those statistics to diagnose people’s psychological make-up.

At some point, one of Pennebaker’s students suggested analyzing a different aspect of the language used by study participants. The idea was to start looking at how they were saying what they saying. That meant shifting the focus from the use of content words to style words.

As it turned out, the latter was a real goldmine of insight, leading Pennebaker to discover previously unknown links between speech and human psychology.

Here are 3 lessons showing how our use of style words discloses hidden information about ourselves:

Pennebaker’s book demystifies this part of human communication that usually completely escapes our attention. Want to learn about the fascinating insights from his research? Let’s dive in!

Lesson 1: Your social skills and the use of style words are located in the same region of the brain.

The English language and most other modern languages consist of two types of words. The first are content words – verbs, nouns, adjectives, and pronouns. These convey culturally shared meaning and denote objects, actions and abstract concepts.

Style or function words are the second type. This group includes pronouns, prepositions, articles, negations, and conjunctions. These are the words we use to organize and structure our language and make sense of the content words.

While our conscious mind usually focuses on the content words and largely ignores the function ones, it’s actually the latter that make up most of our language. They are also the ones that disclose the most information about us – for example, the degree to which we have mastered social skills.

That’s because our use of style words is linked to how we process our social context. Both structuring our speech and skills such as reading other people’s facial expressions or concealing emotions are located in the same region of the brain – the frontal lobe. Pennebaker says that this makes the two directly correlated.

Turns out, it may be possible to tell how out-going or socially awkward a person is just by looking at their use of pronouns or prepositions!

Lesson 2: The pronouns you use disclose a lot about your socialization and thinking style.

During his research, Pennebaker found that style words can reflect a lot more about people than just their social skills. In fact, it seems that the whole process of socialization each of us went through is heavily reflected in the use of pronouns.

This has a lot to do with the level of self-focus any particular person exerts. As studies have shown, this may be different for men and women – and shows in the way they use language.

A woman’s language is usually more loaded with “I” pronouns, suggesting that they are more conditioned for self-awareness and self-focus. Men, on average, use these singular, first-person pronouns less frequently. In turn, their speech is more loaded with articles which, according to the author, is connected to the fact that men talk about specific objects more often than women.

However, gender is not the only factor influencing our use of style words. Another one is our thinking style. Pennebaker analyzed this connection by looking at stream-of-consciousness essays written by many different people during one of his experiments.

His conclusions led him to identify three different thinking styles that showed through the respective use of function words. Formal thinking was characterized by frequent use of articles and prepositions. Analytic thinking, displayed by the people who strove to understand the world around them, was verbalized through a high content of negations and exclusives. The last type, narrative thinking, used a variety of pronouns, past tense verbs and conjunctions.

Lesson 3: People who use function words in similar ways are more likely to get on well.

What also matters is how people use language in relation to one another. Have you ever noticed yourself “borrowing” phrases or even just particular words from your friends or movie characters?

This is a perfectly natural process, called “language style matching” (LSM) by linguists. It involves one person mimicking another’s use of function words, especially pronouns. Interestingly, the extent to which LSM occurs is dependent on the level of engagement with the other person.

This has far-reaching implications. For example, researchers found that by measuring LSM during a speed dating experiment, they could, to some extent, predict how compatible the couples will be in the future. It turned out that 77 percent of the couples who scored high on LSM tests were still dating after three months. The same was true for only 52% of those whose LSM score during the experiment was below average.

The use of pronouns can also be a good predictor of the performance in teams. Here, it is all about how much individual members identify with the team as a whole. Pennebaker says that this may translate into how often they use the pronoun “we,” in reference to the team activities.

If the frequency is high in most members – there are good chances that the teamwork will be a success.

The Secret Life of Pronouns Review

The Secret Life of Pronouns is the kind of book that has the potential to reveal a whole new world to you. Turns out that, by paying attention to the little habits in each others’ (and our own) language, we can access information that otherwise remains hidden! If you read this book attentively you will, yet again, be reminded how much human connection is based on the unconscious, yet crucial, behaviors and tendencies. And that is truly eye-opening.

Who would I recommend The Secret Life of Pronouns summary to?

The 35-year-old life coach who wants to get a more nuanced image of their clients, the 22-year-old linguistics student looking for inspiration for an essay, and to anyone who is eager to explore the intersection of the human mind and language.