1-Sentence-Summary: The Power Paradox frames the concept of power in an inspiring new narrative, which can help us create better and more equal relationships, workplaces, and societies. 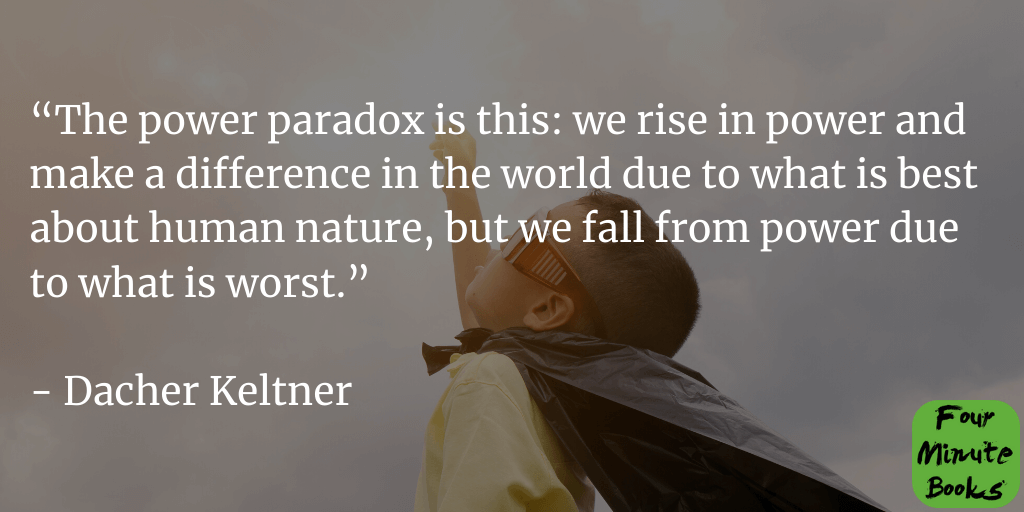 With The Power Paradox: How We Gain and Lose Influence, Dacher Keltner comes to show that the narrative we use to define power is biased. It’s been largely shaped by Machiavelli’s The Prince – a book published 500 years ago! Since then, the main associations with the word “power” revolve around fraud, manipulation, and strategic violence.

Yet, when we look closely at how power emerges, we start seeing it as a positive and socially important force. Keltner’s been researching this for 20 years. He’s found out that when someone can influence others it’s because they have the ability to enhance their lives. In other words, power comes as a “reward” for being socially useful.

The paradox, however, comes from the very experience of feeling powerful. Once people get power, it often causes the person to begin displaying socially harmful behaviors. The decay of power isn’t far behind.

Keltner says that the key to obtain and maintain power is learning how to deal with the power paradox. His book explains how to do just that.

Here are 3 lessons that shed new light on the concept of power:

This book is a chance to reframe the concept of power in a new, more constructive way. If you’re curious, let’s dive in!

To see power as a socially necessary and constructive phenomenon, look at its workings in daily life. Many of our interactions are shaped by the experience of power – and it is important to realize that.

Consider the dynamics between younger and older siblings during adolescence. Usually, the older sibling has the advantage of being more educated and experienced. As a consequence, he or she naturally assumes power over the younger one. This plays an important role in how both siblings interact with other people later in life.

Research shows that in situations when power is not assigned by default, it emerges sooner or later as interactions between people unfold. This can be illustrated by the leaderless group discussion paradigm.

Kelter describes an experiment where a group of strangers comes together to solve a problem with no assigned roles. They then had to participate in a leaderless group discussion. The researchers observed that, over time, some people naturally assumed the role of leaders and thereby entered the position of power. Interestingly, power came from not only confidently voicing their own opinions – but also by encouraging others to do so.

This brings us to describe how power is born within a social context.

Lesson 2: Power comes from your ability to improve the lives of others.

A lot of people think that they must claim power by force. No wonder why – when we look at the world’s historical events, it often appears that power comes from suppressing another. After all, the Spaniards managed to forcefully take over the Native Americans’ territories – didn’t they?

Keltner is coming to tell us that the authentic, constructive power that we should be striving towards comes from a different place. We should see it as a reward we receive from others by being helpful to them.

There is a number of studies proving that the more supportive and kind a person is, the more social power they get. It is also very apparent in indigenous Inuit cultures. There, the more food an individual shares (in case of men) or helps with childcare (in case of women), the more influential within the tribe he or she becomes.

The trickiest part, however, is maintaining the power you have earned. Initially, it may feel natural and easy to share and support others. But once an individual realizes that they are in a place of power, the feelings of empathy for others may subside – because they no longer seem necessary. This is the moment, when, according to Keltner, most people lose power – because they don’t really understand how they obtained it in the first place.

The key to maintaining power is remembering to never take it for granted. You will only have it as long as other people decide to gift you with it. And that depends on how caring, generous and grateful you are towards them.

Lesson 3: Powerlessness often stems from being at a social disadvantage and it can cause health damage.

It would help the world if people would be willing to see their power that stems from social privileges. Unfortunately, according to Keltner, those who have such power often find smart ways to explain it away.

For example, one study showed that people from the upper class tend to see themselves as more capable than those from lower classes. According to Keltner, this can translate into a belief that they succeeded in life due to their own hard work and qualifications. Their power often blinds them to see the privileges they enjoyed, such as good education, social status and a considerable amount of wealth.

Conversely, the lack of power is often an effect of being a member of a disadvantaged community. It has been demonstrated, for example, that Afro-Americans in the US are more likely to be killed or mistreated by the police than other races. This demonstrates how certain social groups, in particular, have feelings of powerlessness.

What is more, the stress that comes from feeling powerless can have very real consequences for health. There are studies showing that children from low-income families may have their brains developed by 3-10% less than those from better-off families.

This demonstrates that the topic of power isn’t just for courtrooms and state politics. It is also a fundamental issue we must tackle to create a more fair and equal society.

The Power Paradox is an important voice calling for the much-needed paradigm change in humanities and social sciences. It makes you acutely aware that the ways of thinking about power, dominance, and influence that most people believe are outdated. If you like to dig into social issues and have an interest in the psychology of human interactions, this book will be enriching.

Who would I recommend The Power Paradox summary to?

The 45-year old policy-maker who is genuinely dedicated to creating positive social change, the 32-year old HR employee who wants to become better at their job and to anyone passionate about the idea of social and personal empowerment.