1-Sentence-Summary: The Power of Now shows you that every minute you spend worrying about the future or regretting the past is a minute lost, because the only place you can truly live in is the present, the now, which is why the book offers actionable strategies to start living every minute as it occurs and becoming 100% present in and for your life. 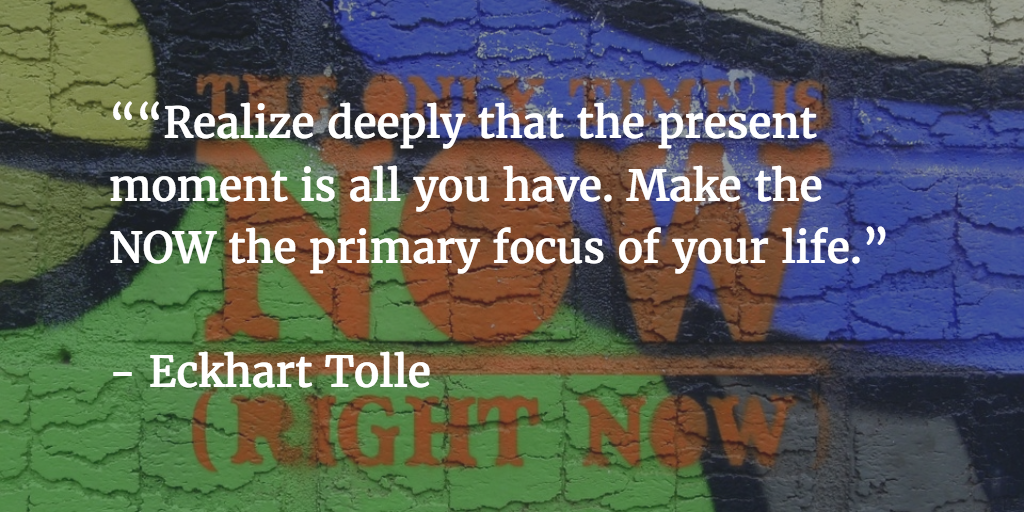 Plagued by depressing late-night thoughts, he started questioning what it is that made his life so unbearable and found the answer in his “I” – the self-generated from the power of his thoughts in his mind. The next morning he woke up and felt very much at peace because he’d somehow managed to lose his worrier-self and live entirely in the now, the present moment.

After spending several years doing nothing but enjoying his new-found peace, eventually people started asking him questions – so he answered. Eckhart started teaching and published The Power of Now in 1997, which eventually went on to become a New York Times bestseller in 2000 after Oprah Winfrey fell in love with it and recommended it.

Here are 3 lessons from it to help you worry and regret less:

Ready for a trip to this beautiful place called the present? Let’s go!

The Power of Now Summary

Lesson 1: All life is is a series of present moments.

If I asked 100 people to name the two most common bad feelings they can think of, 99 of them would probably respond with regret and anxiety.

The reason we regret and worry about a lot of things lies in the way our minds work. The constant stream of consciousness and thoughts in our head, which plays 24/7 in our heads, is mostly preoccupied with 2 things: the past and the future.

When you wake up 10 minutes too late in the morning, what’s the first thing you think? “Shit, I overslept, I wish I hadn’t hit the snooze button.” closely followed by “Oh no, now I’ll be late for work, I’m sure my boss will yell at me!” – and voilà, you’ve ruined at least the first half of your day.

Therefore, living in any other moment than the present is useless. If your task is to hand in a research paper in 14 days, neither regretting all this time you procrastinated nor worrying about the big workload that’s to come will actually help get you there.

But if you just start solving the first tiny problem and come up with an outline, it’s all downhill from there.

Lesson 2: Any pain you feel results from resisting the things you can’t change.

I’m a big fan of stoicism. Part of their philosophy includes the idea that the only pain you really suffer is the one you create yourself.

Tolle would surely agree since he argues that pain is nothing more than the result of you resisting to all the things you cannot change. We think a lot about the future and the past, but can live only in the present and have therefore no means to change many things from the other two that we’re unhappy about.

Then we fill the gap between these by developing a resistance to these things, which is what we experience as pain, whether psychological or physical.

When you’re angry, that anger usually makes you think and act less rational, which more often than not results in a worse situation and thus, more pain – but it’s really all in your head.

Lesson 3: You can free yourself from pain by constantly observing your mind and not judging your thoughts.

How then, can you get rid of pain? Tolle recommends 2 things:

The first strategy is based on an effect from physics, called the quantum zeno effect. It says that you can freeze any system in its current state by constantly observing it. Asking yourself this question over and over will usually delay your actual next thought, thus giving you enough time to realize how much time you actually spend in autopilot mode. This way you can start interrupting your mind and thus separating from it.

The second method is meant to help you listen to your body and learn to accept the constant, nagging thoughts in your head, about what you should be doing or not doing. The next time you do wake up late for work, just listen to that voice that says “You should’ve done better!”, but don’t act on it. Notice it, see it, accept that it’s there, but don’t give in to its advice.

These two tools will help you separate your body from your always-on, thought-driven mind, after which you’ll be in less pain because you resist the things you can’t change a lot less.

The Power of Now Review

Enlightened spiritual teacher or insane quack? Opinions on The Power of Now couldn’t fall farther apart. But that’s not what we care about at Four Minute Books. We care about learning from the best in the world. And when a book sells 3 million copies, that sure is something to pay attention to. I didn’t use to be into meditation, but now I am, and this book has helped me a lot on my mindfulness journey. I’m sure it can do the same for you if you give it an honest try!

Who would I recommend The Power of Now summary to?

The 29 year old, who’s worried, because she hasn’t figured out her life yet, the 85 year old who regrets the many stupid things he did during his youth and at war, and anyone who spends more time complaining than actually working on improving things.

Rate this book!
This book has an average rating of 4.3 based on 63 votes.