1-Sentence-Summary: The Fifth Agreement is an update and sequel to one of the world’s most popular self-help books, which shines a new light on ancient, Toltec wisdom, to help us master our selves, cultivate deep awareness, and be who we really are. 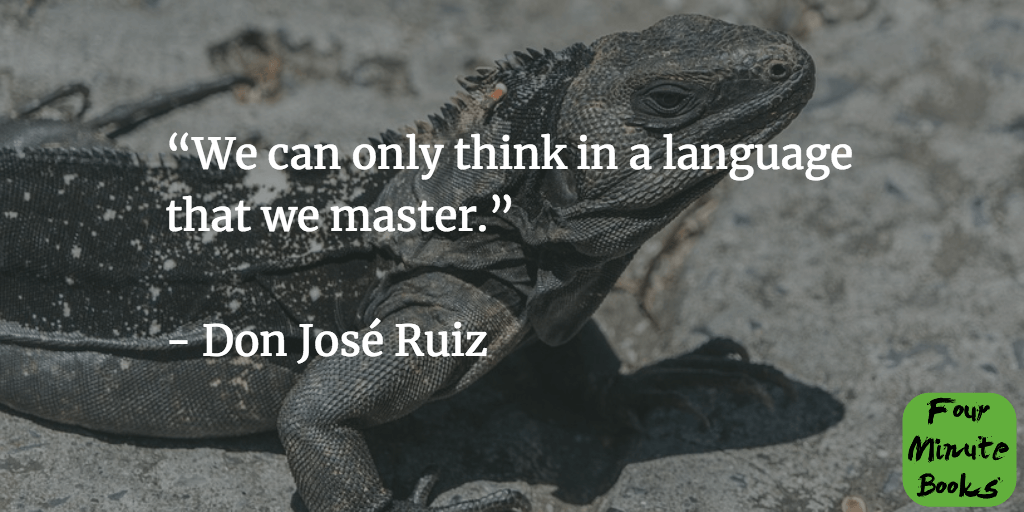 One of the reasons we’re all deeply afraid of finding great success is that a monumental challenge comes with it: how do you follow up on that? Once you’ve sold your company, wrote a bestseller, or landed a blockbuster movie hit, the world will expect more of the same, but better. That’s a lot of pressure.

I guess that at least partly because of that, for over a decade, Don Miguel Ruiz didn’t follow up on his book The Four Agreements at all. Because you can’t top eight years of bestseller status and six million copies sold. In 2009, however, instead of just publishing a revised edition, he co-wrote an update and sequel with his son, Don Jose Ruiz. It’s called The Fifth Agreement.

As the name suggests, the book adds a fifth guiding principle, but it also re-explains the four previous ones:

I can’t dive deeper into all of them here, but I’d like to share the Ruizs’ reasoning behind where our need for new agreements with ourselves comes from. This’ll also help us understand the first one. Here are my 3 takeaways from The Fifth Agreement:

Lesson 1: Symbology makes the world go round, but it also conditions us.

In The Four Agreements, Don Miguel described the sum of uncontrollable elements in our lives as the source of our domestication. These include all habits, attitudes, ideas and behaviors we pick up as innocent children from parents, mentors, friends, and teachers. Miguel called it a ‘collective dream.’ You know, what society expects of us.

His son now expands on that idea and illustrates where it comes from. As toddlers, we act naturally, in accordance with our tendencies. We laugh, we eat, we sleep, we explore and we create. We don’t judge ourselves and we don’t regret our actions until, gradually, we’re introduced to symbology.

Symbols are a huge part of all our lives and without them, the world wouldn’t function. However, most of these symbols are somehow biased culturally and socially. They come attached to certain values, things we admire and desire, and norms, the behaviors we deem acceptable. That’s how we pick up all these ideas of what we ‘should’ have and do, and by the time we grow up, we’re completely conditioned from this domestication.

Lesson 2: Everything we know rests on symbology, which means there are no absolute truths, just relative ones.

The first piece of evidence that symbology is important, regardless of its flaws, is that you couldn’t be reading this without it. All of humanity uses a shared catalog of symbols to communicate: language. We don’t all use the same catalog and we don’t all understand each other, but without alphabets, words, and sentences, we could neither read nor talk.

However, what this also proves is that all human knowledge must rely, to some degree, on common symbology. Unless at least one person agrees with you that the big brown and green thing is called a tree, or that there’s vitamin C in oranges, or even that 1+1=2, you can’t call these things facts, let alone true.

Since we must use symbols to represent knowledge, and all symbols require that at least two humans agree, everything we know and believe in can only be relative truth. Not that universal truths don’t exist – a tree always exists, regardless of what you call it – but there is very little that isn’t up for grabs. We’re just so used to the symbols we know, our language, what we learn in school, the values our parents teach us, that we don’t think of them as debatable. But they are.

Lesson 3: Being impeccable in your use of words allows you to use symbology to your benefit.

Given language might be the most pervasive example of relative truths in our lives, it makes sense that the first agreement is “be impeccable with your word.” We might not all be writers, painters, and directors, but with every word we say or pick up in a conversation, we continue to tell the story of our lives in our heads.

When we use words impeccably, we only allow them to improve our lives, not be destructive. This starts with the words you choose and ends with the degree of relative truth you assign to words from others. The goal here is to, like the toddler you once were, not judge or reject yourself for who you are. At the same time, when others insult you, see their words as just symbols, their truth, not yours, and you’ll better be able to let it wash away.

The next time you catch yourself thinking “I’m not good enough,” or “I should have done that,” or someone labels you fat, lazy, arrogant, or stupid, think back to symbology. Take a deep breath, step back, and see the words for what they are: relative truths that you are free to not choose.

Since this book recaps its predecessor and goes a bit deeper, I guess The Fifth Agreement is not just where it ends, it’s also the place to start. If you really dig Toltec wisdom, however, nothing speaks against reading both, or reading one now and the other one a few months or years later.

Who would I recommend The Fifth Agreement summary to?

The 17 year old introvert, who gets bullied at school, the 39 year old scientist, who argues with facts for a living, and anyone who doesn’t like the voice in their head.