1-Sentence-Summary: Say Nothing contains the awful story of murder amid the Northern Ireland Conflict and a reflection on what caused it, those who were primarily involved, some of the worst parts of what happened, and other details of this dark era in the history of Ireland. 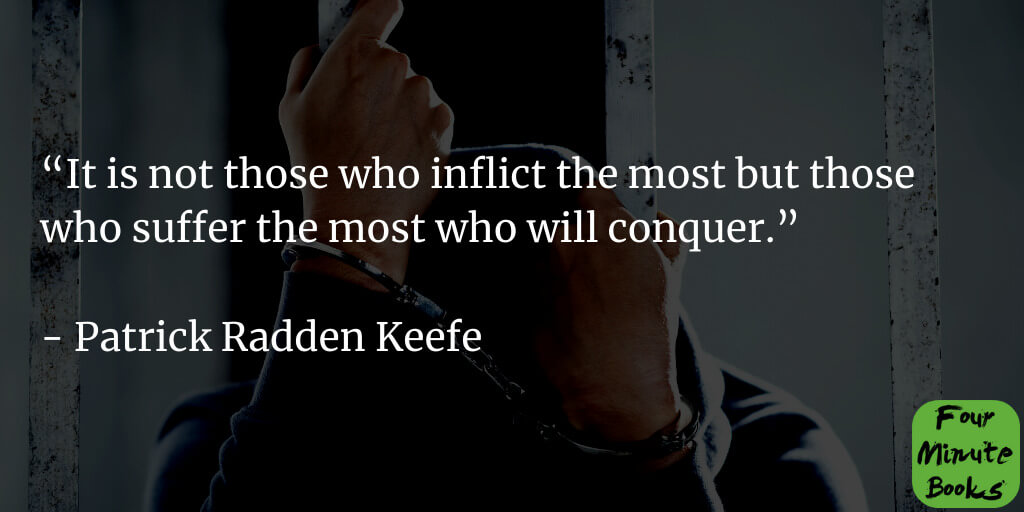 On December 7, 1972, a Belfast woman named Jean McConville heard a knock at her front door. Soon after, a group of masked men and women burst into her home and grabbed Jean while her ten children watched.

Her screaming children attempted to cling to her as they force her out and into the van. It was the last time they ever saw her alive. Jean’s children would spend the next three decades trying to sort out what happened to their mother.

In the book Say Nothing: A True Story of Murder and Memory in Northern Ireland, Patrick Keefe shares the untold true story behind Jean. Her disappearance wasn’t any ordinary kidnapping. It was an execution that was part of a vicious conflict in Northern Ireland.

We learn that Jean’s mystery is the center of a web of tragic stories that make up what is known as the Troubles, a bloody conflict between Protestants and Catholics. Keefe’s story guides us through what actually happened to Jean and how she fits into the tragic conflict that would claim the lives of thousands more.

Let’s get right to it and get learning!

Lesson 1: At the height of the Northern Ireland Conflict, Jean McConville mysteriously disappeared.

38-year-old Jean McConville had a tough life, to begin with. She had given birth to 14 children and lost four of them. Her husband had recently died of lung cancer, leaving her to raise her ten children alone with little money in a small, deteriorating home.

But things got much worse when a knock came that night. The intruders burst into her home and told her she was coming with them. The kids recognized some of the group as their neighbors. The moment they took her away, no one saw her then.

Why would this ordinary mother disappear? It turns out she found herself a victim of the Troubles, also known as the Northern Ireland Conflict. Northern Ireland’s Catholics made up about half the population, but they were long victims of relentless discrimination at the hands of Protestants in the area.

They formed the Provisional Irish Republican Army (IRA). With the hope of uniting Ireland again.

Lesson 2: The Price sisters and Gerry Adams were just a few of the important figures in the Irish Republican Army

Their preferred method for provoking the British Government was the car bomb.

Sadly, these IRA car bombs caused mayhem and bloodshed on a huge scale in Northern Ireland and England. They preferred them because of the ease of transportation and camouflage.

On Bloody Friday, the IRA used 20 car bombs in Belfast that killed nine and injured 130. The IRA maintained they were only meant to damage buildings and government infrastructure. Soon members of the IRA started to regret that the people of Northern Ireland seemed to be the only ones suffering in the conflict.

So Gerry Adams, one of the top decision-makers of the IRA, and sisters Marian and Dolours Price set out to correct the imbalance. The sisters and several others parked car combs in London outside of British institutions. They injure people were a total of 250.

That day, the Price sisters were arrested. Marian and Dolours were sentenced to 20 years in an English prison. They demanded they were transferred to Northern Ireland to serve their sentence, but to no avail. So they decided to go on a hunger strike.

As the sisters deteriorated rapidly, the British Government started to worry. They didn’t want to make martyrs out of the young Irish women. This would probably mean more IRA violence. But instead of listening to the demands, they decided to violently force-feed them through a tube, which people on both sides were horrified by.

In the end, the sisters resisted so much by biting the tubes and vomiting what they were fed. The British had no choice but to give in to their demands.

In the midst of all the violence, the children of Jean McConville still searched for answers. Finally, after the conflicts ended in the late 1990s, they got an answer. Members of the IRA were interviewed as part of a project for Boston College.

One of these was Dolours Price, and another was Brendan Hughes, a right-hand man to Gerry Adams. They both explained what happened to Jean. When the IRA discovered she had become an informer to the British, they searched her house and found a military radio. She confessed that she was using it to give intel to the British.

A week later, they discovered her with another military radio. The IRA decided they had no choice but to execute her. They dragged her away from her home and loaded her into a van. Then, they shot her on the back of her head.

In deciding what to do with her body, some IRA members said she should be dumped on a city street as a warning. Gerry Adams insisted this could backfire on them. People might not support the IRA if they associated them with the murder of a mother and widow.

They decided she should permanently disappear, making it impossible to link the IRA to the killing. So they buried her in a secret location. 31 years later, her remains stayed there until they were discovered. Finally, her family could lay her to rest.

Well, this makes for yet another crazy historical event and story that I’ve never heard of! Say Nothing is tragic and eye-opening. I flew over Ireland once on my way to England, and that’s about all I’ve ever remembered about it, but after reading this book, I’ll probably remember a lot more!

Who would I recommend the Say Nothing summary to?

The 65-year-old history buff who doesn’t know much about recent events in Europe, the 34-year-old mom who loves true crime stories, and anyone that’s curious to hear an interesting and terrible story.

Rate this book!
This book has an average rating of 3.1 based on 8 votes.