1-Sentence-Summary: Reasons To Stay Alive shows you the dangers and difficulties surrounding mental illness, uncovers the stigma around it, and identifies how to recover from it by sharing the story of Matt Haig’s recovery after an awful panic attack and subsequent battle with depression and anxiety. 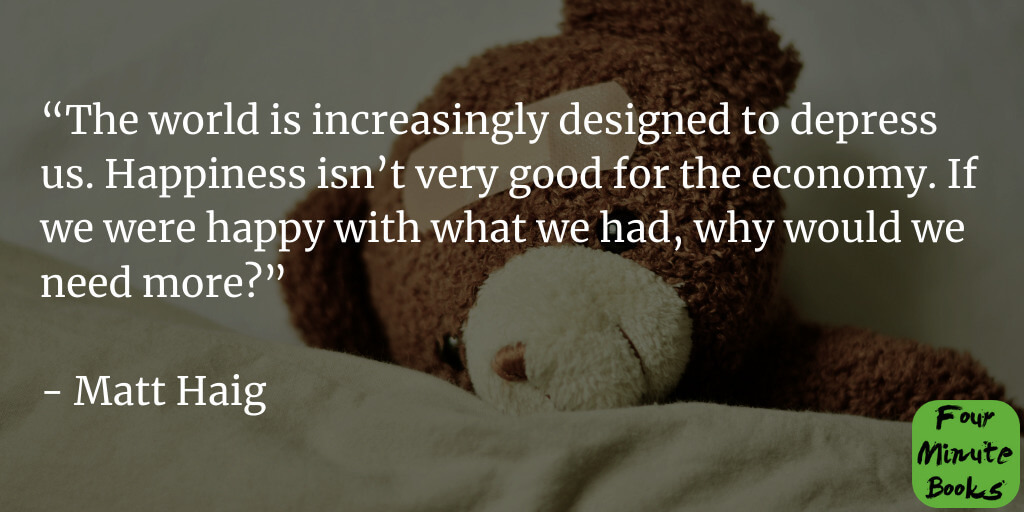 At just 24-years-old, while living in sunny Ibiza, Spain with his girlfriend, Matt Haig had a terrible panic attack that left him in bed for three days. It also began a long road to recovery from the depression and anxiety he’d been silently experiencing.

While it seemed sudden at the time, Haig looked back and noticed the signs were always there. From an anxiety-filled camping trip as a youth, to a college presentation that made him hyperventilate, his mental illness was always there.

But like most people with depression, and especially men, social isolation kept Matt from getting the help he needed until it was almost too late. Thankfully, he learned a few strategies to cope and now lives a happy life with his wife and kids.

We can’t pin down the exact cause of mental illness and its impossible to prescribe a one-size-fits-all fix to it. But Haig discovered some simple strategies that helped him get through it.

He outlines these tips, along with his entire story, in Reasons to Stay Alive.

Here are 3 helpful lessons I got out of this book:

Are you ready to discover some powerful lessons on mental health? Let’s go!

Lesson 1: Get out of your own head by reading books if you want some help to get through depression.

Have you ever tried to explain a complicated concept to a friend? While you know how to do everything from opening your mouth to saying the words, they often just don’t get it.

It’s frustrating to not be able to make yourself understood, which is just what the author experienced after his panic attack. He couldn’t adequately express his feelings to family and friends in a way they could comprehend.

Because his paradigm was so different from theirs, it was like “trying to describe earth to aliens.” Even more frustrating was the fact that he didn’t really know how to explain what was going on to himself.

Haig’s perspective was completely drowning in depression and anxiety.

But hope came in the form of an unlikely hero: books. Although many use literature as a way to escape their reality, the author experienced the opposite. The right books helped him find himself once more.

As he discovered characters that felt alienated, he began to realize that he wasn’t as alone as he thought. He felt that he could relate to these authors, who knew what it felt like to be as lonely as he was.

Even the very language of books, which can sometimes be perplexing, helped Haig understand what he was going through. The purpose-filled protagonists lent him their direction when he didn’t feel like he had any.

And now his book provides that for those who read it!

Lesson 2: Even some of the greatest leaders in the world have experienced mental illness, which does have some benefits.

Did you know that Winston Churchill and Abraham Lincoln both struggled with depression? Behind their inspiring and ambitious careers was this silent struggle with mental illness.

Most of us would consider their achievements in spite of their struggles admirable. But do we ever consider that maybe their demons were the entire reason these two leaders were so successful?

The truth is, there are benefits of mental illness, like improved empathy and perception, but we usually don’t talk about them.

Someone who has experienced depression, for example, knows well know painful life is sometimes. That might have been the reason why Lincoln was so understanding of the awfulness of slavery.

In Churchill’s case, he was among the few European leaders who had a bad feeling about the Nazi’s from the beginning. If it weren’t for the sensitivity that he got from his mental illness, he might not have picked up on how dangerous they were.

Even the author used to resist the thin skin that he felt his depression gave him. But as he began to embrace it, this ability helped him become the successful writer he is today.

Because of his ability to remain close to his feelings, Haig also has deeper joys in the little things like spending time with his kids.

Lesson 3: Recovery is possible, but won’t be as clear of a path as you might think.

It’s easy to get caught in the trap of thinking that the healing process will be linear. But the reality is, you don’t just slowly improve and eventually get “cured.”

It took Haig fourteen years after his breakdown to realize this. He doesn’t wait for complete recovery but instead lives his life with the mental illness. That means a recognition that his mood will change and still be low sometimes.

He knows that moments of intense worry won’t last. And he realizes that there is a lot more to enjoy about life than he could ever dream of.

While he recognizes there is no magic pill to cure his mental state, Haig does have a few tools he uses to feel better.

Eating well and getting enough sleep are important on that list. He also goes running to help him relax. Incorporating yoga and meditation into his routine further helps him reduce the intensity of his racing thoughts.

Limiting social media is another vital tool that Haig uses to combat mental illness. He replaces those time and energy wasters by spending time with his wife and kids.

Haig also continues to enjoy reading and travel. These powerful habits unlock the ability to get out of his head and see how others view the world.

All of these are Haig’s reasons to stay alive.

I really enjoyed reading Reasons To Stay Alive and I’m so impressed with Matt Haig’s courage to write it. As one who has had bouts with mental illness in the past, I can appreciate so many aspects of this. It’s vital that we as a society shed light on this silent killer, the stigma around it, and how to properly treat it other than just throwing meds at it.

Who would I recommend the Reasons To Stay Alive summary to?

The 28-year-old who is going through a rough time and isn’t sure why they’re having a hard time getting out of bed in the morning, the 57-year-old who has adult children that suffer from depression but isn’t certain how they can help, and anyone that struggles with mental illness in any form.