1-Sentence-Summary: On The Origin Of Species is the foundational book for modern evolutionary biology that marked a turning point in how we think about the beginnings of humankind. 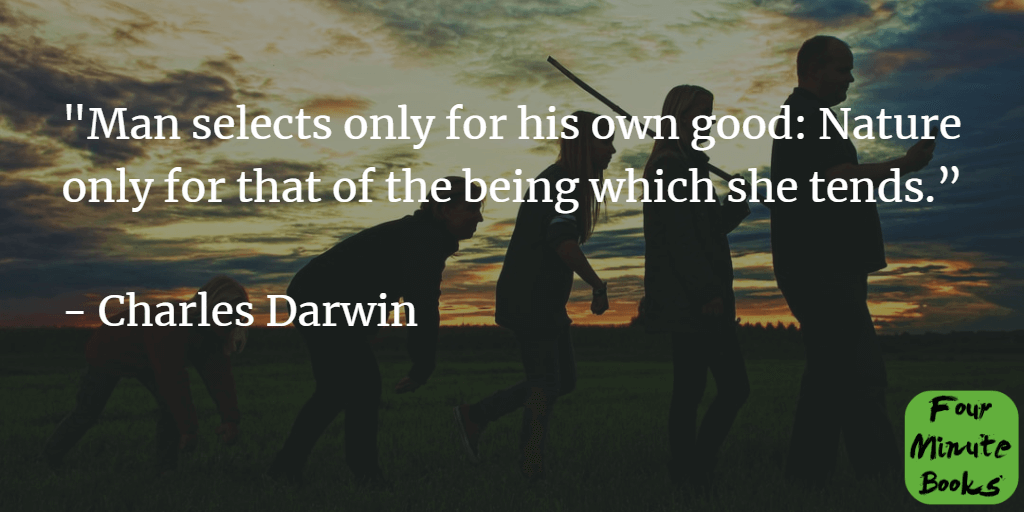 It’s illuminating for anyone to get familiar with Darwin’s work. First, because it’s shaped the way we think about the natural world and the origin of life itself. Second, because it gives more nuanced insight into concepts like “survival of the fittest” or “descent with modification.”

Julian Huxley, who wrote the introduction to the 150th-anniversary edition, describes On The Origin Of Species as “a truly great book, one which can still be read with profit by the professional biologist.” This only shows that On the Origin Of Species contains information that is not always self-explanatory even to the modern-day scientists.

Before you decide whether you want to explore Darwin’s ideas for yourself, let me share my 3 favorite insights:

Without further ado, let’s try and at least touch upon the main ideas of Darwin’s theory. Ready, Freddie?

Lesson 1: To understand natural selection, it may help to look at human selection first.

Before we proceed to explore the laws of natural selection, let’s look at human-induced breeding of certain animals. Various breeds of dogs or pigeons, for example, are the product of human selection.

Let’s assume a pigeon keeper wants to obtain a breed of pigeons with long necks. What she will do is select a couple of pigeons from a bunch with longer necks. After they mate and produce offspring, she will again pick the longest-necked pigeons from among them and breed them again.

After repeating this process for many generations, the breeder will eventually get pigeons with significantly longer necks than those in the first bunch. This process is possible thanks to the rule of descent with modification. According to that rule, parents’ genes are passed down to their offspring – but always with some modification and mixing with their partner’s genes.

We can acknowledge that, in the process of natural selection, nature acts as an “invisible breeder” of the species. However, rather than picking the trait variations based on some arbitrary aesthetic principles (like with pigeon breeding), nature chooses those traits which support the species survival.

The more a specific trait is useful for survival, the more the possessor of that trait is likely to breed. This ensures that the most adaptive traits are passed down to the offspring – and so, the next generations always evolve to be better suited for survival than their ancestors.

Lesson 2: Evolution uses sexual selection and diversification as important factors to decide what genes are passed on.

Survival-enabling traits are important. But they’re not the only factor which decides about how natural selection will shape the species. Other important mechanisms in play are sexual selection and diversification.

A very well-adapted individual, whose genes enable it to thrive in their current environment may still not manage to pass those genes on if it fails to mate. That’s why being attractive to the potential sexual partner is also a key factor in natural selection.

Interestingly, the competition in this realm happens mainly between males. As Darwin notes, male are the ones who have to adjust their traits to the liking of the females. The latter, conversely, get to decide which characteristics they value the most in their mates. Consequently, they have an important say in how the species evolves!

This is certainly an important point to the ongoing feminist debate. But Darwin was probably unaware of that while making this observation.

Another important factor for a species’ survival is diversification. As a population of one species grows, it needs to spread to other habitats in order to simply feed itself. As it spreads, the particular individuals gradually adjust, specializing to live in slightly different environments, with slightly different food resources and landscapes.

Over time, diversification within one species can go deep enough to create several other species originating from the same ancestor. This gradually leads to a different distribution of species based on geographical areas.

Lesson 3: The consequence of natural selection is the divergent biosphere in very similar geographical locations.

One question that may be boggling is: why, in very similar environments across the planet, do we encounter different biosphere? After all, if species evolve to comply with their environment, shouldn’t we see the same species distribution where the living conditions are virtually identical?

For example, there are some parts of South America where the environment is pretty much the same as certain areas of Australia. However, the emu is only indigenous to the Australian continent. Why is that?

The main factor at play here is migration barriers. Depending on the continent, these may be major mountain chains or oceans blocking the migration of the species.

As I explained when mentioning the diversification factor, species grow in volume and, often, spread geographically to find new habitats and food sources. This spreading, however, occurs only until a species reaches a migration barrier that is insurmountable for it. For an emu bird, such a barrier is the Pacific surrounding Australia.

Interestingly, some species figured out clever ways to surpass their migration barriers by employing other, more mobile organisms. For example, certain clams attach themselves to ducks’ feet and fly long distances with them. This way, they can find new habitats that they wouldn’t reach with their own, rather poor mobility skills.

On The Origin Of Species Review

Is it even possible to write a “review” of a landmark book like this one? Darwin’s erudition and intelligence become self-evident as you read through On The Origin Of Species. Although some of his assumptions are outdated it is a pleasure to explore the natural world, guided by Darwin himself.

Who would I recommend the On The Origin Of Species summary to?

The 22-year-old biology student looking for supplementary reading, the 30-year-old freelance journalist interested in nature and environmental causes and to anyone who is trying to understand life better.