1-Sentence-Summary: How To Be An Antiracist will make you a better, kinder, and more fair person by revealing how deeply ingrained racism is in our society and outlining what we can all do to annihilate it completely. 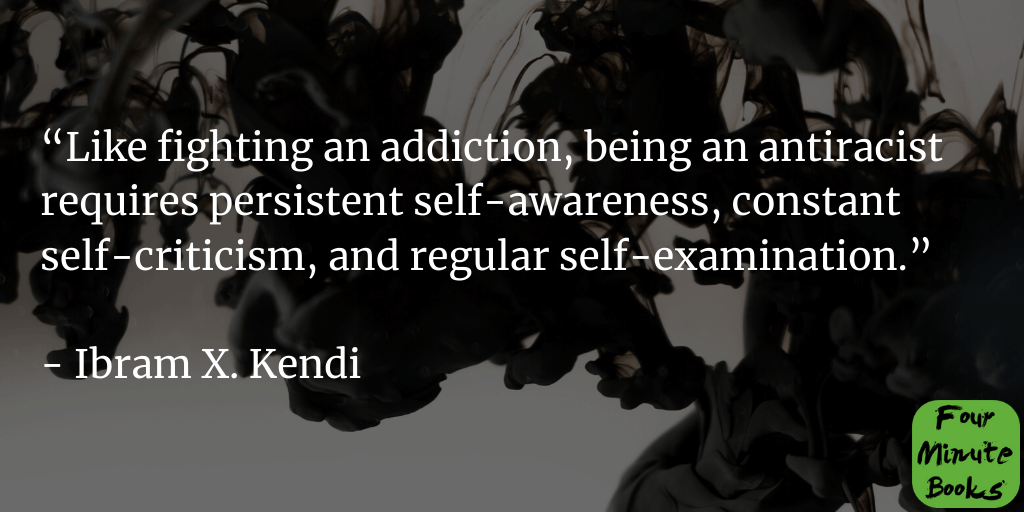 When I was in fourth grade I remember a very odd beginning of one school day. The teacher divided us up into two groups, those with lighter hair and those with darker.

As part of the lighter-haired kids, I had to sit in silence doing homework while the other kids got recess, treats, and kindness from our teacher.

It was confusing, frustrating, and taught me a lesson I’ll never forget. One of the dark-haired kids eventually realized that this wasn’t fair and said something. That’s when the teacher stopped the experiment and told us that we would be learning about Martin Luther King Jr. and the issue of racism.

Although society has made great strides since the days of MLK, racism is still a sickening issue we deal with today. And while we have the obvious horror of cops killing some black people for no reason, this is only one of many problems that racism brings into our society that we all have a duty to fix.

That’s why you’ll find Ibram X. Kendi’s How to Be an Antiracist such an important book to learn from.

Here are just 3 of the many eye-opening lessons from this book:

Are you ready to become an antiracist? Let’s dive into these important lessons so we can learn how!

Lesson 1: Equality is not dependent on the behavior of certain groups of people.

We sometimes don’t notice aspects of racism in our society. One example was in a claim made by politician Eleanor Holmes in 1985.

She declared that African Americans needed more than just opportunities and financial assistance. Her stance was that the ghetto culture had to be dismantled and that some Black people needed to learn a better work ethic, among other things.

Although she was trying to help, Holmes succumbed to a racist mentality that still pervades society today. It’s called assimilationist racism and believes that for equality, Black people need to change.

The big problem with this ideology is that it puts one race, usually whites, on a pedestal for all others to try to emulate. It’s patronizing to people of color because it treats them like kids that need a lesson in how to behave.

To be antiracist, on the other hand, means to support policies with a grounding in truth. That’s anything that treats all races as equal, regardless of any differences that may appear to exist.

One example is antiracists that noticed the right way to go about improving violent crime rates in African American communities during the 80s.

They noticed that with a rise in crime came an increase in unemployment among young Blacks. Their efforts focused on fixing that by taking down racist policies that made employment hard for these individuals.

Lesson 2: You are a racist if you think there are significant biological differences between races.

As a Black child, the author remembers noticing the other kids in his class at school. The look of one Black girl made him consider how similar he and she were. But when he thought about the white kids, all he could see were deep differences.

The term for this is biological racism, and you’ve probably been guilty of it yourself at some point.

You’re a biological racist if you believe that biological differences between races are meaningful and certain traits are superior or inferior.

To be biologically antiracist, you must realize that all humans are biologically the same and that genetics has nothing to do with racial differences.

The author didn’t think that any certain race was better than others. But he did subscribe to the misguided mentality that some differences are because of race. He considered, for example, Black people to be better at physical activity.

Antiracists, on the other hand, know that there aren’t any genetic differences between races. We are all, genetically, 99.9% the same. Another way to look at it is that you can’t inherit race from your parents.

You can inherit ethnicity, on the other hand, which is only a matter of which part of the world you originate from.

Lesson 3: Racism is a cancer that makes our society and it’s organizations and habits sick, but there is hope for us to beat it.

In 2018, at just 35-years-old, Kendi got the devastating news that he had colon cancer. It got worse when doctors told him that it was in stage four and had spread throughout his body.

Throughout his treatment, however, he saw how cancer and racism are quite similar.

After initially learning of his illness, the doctors let him know that people at his stage of cancer usually had only a 12% survival rate. He believes that trying to beat racism has similarly low odds, unfortunately.

The reason is that, just like cancer, racism is in all parts of our society. We can see this in events as significant as cops murdering George Floyd and also as seemingly small as the various forms of racism we’ve already discussed.

Racism also is a threat to the world’s health, just like cancer is to the body. Just look at how devastating the Civil War was to America.

There is one important difference between cancer and racism though. Cancer patients tend to recognize their illness and stop its progress. Racists, on the other hand, remain in denial. They too often do nothing to stop the onslaught of this disease even within their own communities.

There is hope, however. The author beat his cancer. He believes that with work, we can put the cancer of racism into remission as well.

How To Be An Antiracist Review

How To Be An Antiracist blew me away. It’s hard to find the words to describe how important this issue is, especially when I feel like because I’m white it’s not my turn to speak but rather to listen to those who have been oppressed for so long. Racism is wrong and awful and makes absolutely no sense to me, but just hating it doesn’t do any good. We all need to become Antiracists.

Who would I recommend the How To Be An Antiracist summary to?

The 61-year-old who still thinks it’s okay to use racial slurs and tell inappropriate racial jokes, the 28-year-old who is tired of racism in society and wants to see how they can help, and everyone in the world.

Rate this book!
This book has an average rating of 3.5 based on 50 votes.