1-Sentence-Summary: Hillbilly Elegy is the inspiring autobiography of J.D. Vance who explains how his life began in poverty and turbulence and what he had to do to beat those difficult circumstances and rise to success. 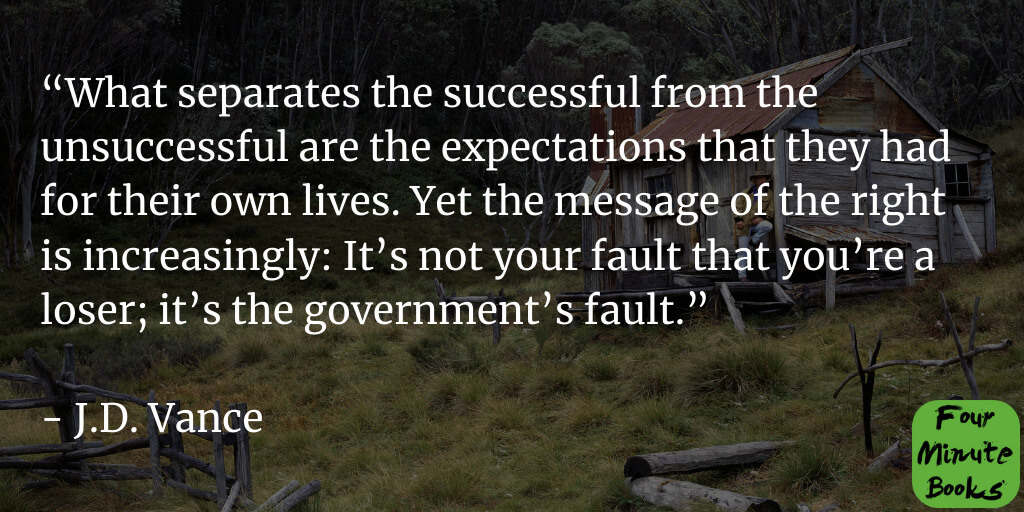 When I talk about the American Dream, what comes to mind? Probably the story of someone coming from a disadvantaged situation and working hard to pull themselves up out of poverty. If you work hard enough, you can achieve anything, right?

This dream is somewhat controversial because it isn’t equally accessible to everyone. But Americans love this kind of story. Don’t believe me? Just look to Hollywood and you will find countless movies featuring this storyline.

In Hillbilly Elegy: A Memoir of a Family and Culture in Crisis, self-proclaimed hillbilly J.D. Vance tells his version of the American Dream. Born into a life of poverty, violence, and substance abuse in a rural town, he tells the story of how he managed to escape the cycle and eventually land a job in Silicon Valley.

Let’s dive right in and see what lessons we can learn from Hillbilly Elegy!

Lesson 1: J.D.’s childhood was really hard because of his awful family life.

J.D. was born in the rust belt town of Middletown, Ohio. After the local steel manufacturer was outsourced, the people lost their jobs and the property values declined, trapping the residents in poverty. This was the world he was born into.

His father and mother divorced when he was young and he was primarily raised by his mom and her ever-changing boyfriends. Though his mom worked hard as a nurse to provide for her kids, she had problems with drugs and alcohol. J.D. frequently was exposed to violence and yelling.

At one point, his mom got so upset at a slight criticism that she threatened to crash the car. She beat him instead and ended up being carried away in handcuffs by the police.

The constant yelling and violence in his home took a toll on his health and his grades were declining. Things became even worse when his mother attempted suicide on more than one occasion.

His teen years were full of instability as he and his mother moved from place to place with the men she dated. He began to struggle so much because of his home life that he nearly dropped out of high school. But he found new hope when his mother checked into rehab and he moved in with his grandmother.

Lesson 2: When J.D. moved in with his grandmother, everything started to change and it continued getting better when he joined the military.

When he was living with his grandma “Mamaw’, J.D. finally had some stability. She encouraged him to work hard and apply himself in school. Her three rules were that he get good grades, get a job, and help her out. He was happy to finally have structure and complied with these new rules.

His grandmother helped him by buying him an expensive graphing calculator and compelling him to sign up for advanced math. He was finally happy, and he even aced his SAT.

When he graduated, he made the decision to join the US Marines. This is where he learned important life lessons he hadn’t before, like how to take care of himself, how to be a good leader, and how to manage his finances.

After the military, he went to college, worked like crazy, and got into Yale law school. As a poor kid who was the first in his family to get a degree, he realized how different he was from his classmates. It was lonely at times, but he felt optimistic about the future. Vance believed that as long as he worked hard he would land a good job.

Lesson 3: We can learn valuable lessons from Vance’s rise out of poverty.

Vance soon learned at Yale that success is all about social capital, or who you know. Most students didn’t get a job by resumes, but by connections. Since he was a poor boy from Ohio, he didn’t really have connections that others seemed to have to the Ivy League world.

He worked hard to get on good terms with his professor, who gave him a recommendation when it came time to find a job. Vance says hard work and social capital are what allowed him to beat the odds. He landed a good job and would never be poor again. Others in his position are not usually so lucky.

However, J.D. was fortunate enough to rise above the trials and he now has a great job and is settled down with a family.  He hopes to inspire kids like him and help them see that they too can beat the odds. He also advocates for knocking down barriers that keep people like him from becoming successful like enacting housing policies that segregate the poor.

What a crazy, sad, and inspiring story! Reminds me a lot of Tara Westover’s book Educated. One side of my family is what you might call hillbillies but they’re nowhere near this level of crazy and are some of the nicest people you’d ever meet. Hillbilly Elegy makes me grateful for my good upbringing and also inspired me to rise above the few challenges I do have!

Who would I recommend the Hillbilly Elegy summary to?

The 17-year-old who has hillbilly parents that’s curious if there’s a chance for them to succeed, the 57-year-old that’s curious about the lifestyle of people like J.D.’s family, and anyone who loves to hear inspiring stories.

Rate this book!
This book has an average rating of 4.7 based on 9 votes.