1-Sentence-Summary: Give And Take explains the three different types of how we interact with others and shows you why being a giver is, contrary to popular belief, the best way to success in business and life. 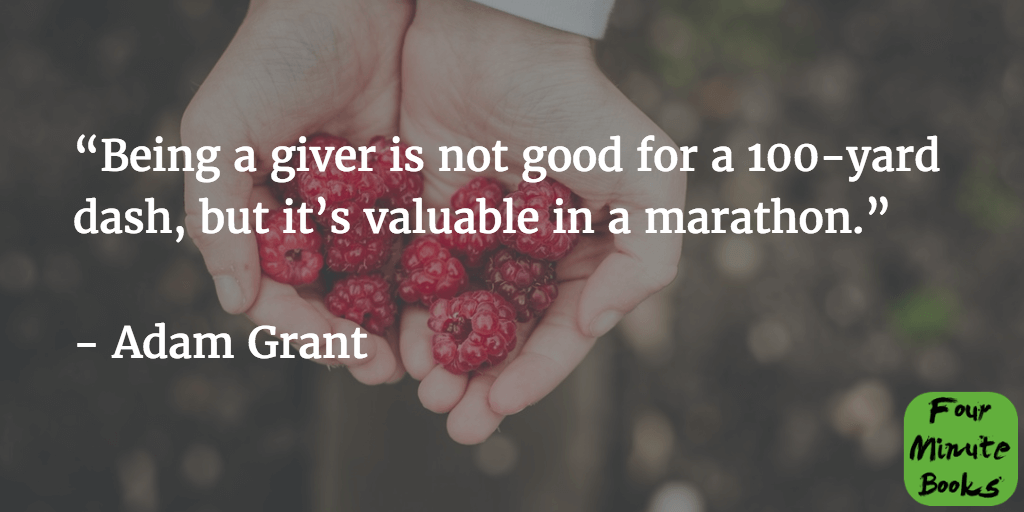 I loved Originals, Adam Grant’s latest book. Give And Take he published in 2013, and while it’s also about personality, its premise is slightly different. An original is something you can become over time, in case you aren’t already. But you’re already a giver, taker, or matcher, so with this one, it’s about switching to the right category, instead of acquiring something that’s totally new to you.

You know plenty of examples of people who match any of the three types already, we all do. There are those, who are preoccupied with making sure they get their share, those who want everyone to have their fair share and of course those, who lead with generosity.

Interestingly, Adam Grant establishes that it’s the very last category, the giver, who’s predetermined to thrive – yes, even in the competitive world of business.

Here are 3 lessons about giving and taking, and why giving’s the best:

If you want to (like me) build an empire on making honey, not hand grenades, then this is for you!

Lesson 1: You adapt your giving style to specific people and situations. It’s fluid.

Sometimes you give, sometimes you take, sometimes you negotiate. While we all have a predominant style that marks us as a giver, taker or matcher, we adapt our behavior to certain situations and depending on who we’re with.

For example, even takers donate money at mass in church, when everyone around them does, while a giver might hide her generosity because she’s scared of being thought of as weird.

Other than peer pressure, how well we can relate to a person also impacts how generous we are. Believe it or not, if you’re a Manchester United fan, and you see an injured runner on the sidewalk, who’s wearing a jersey of the club, you’re three times more likely to help him out, than if he just wore a plain t-shirt.

Our giving style isn’t set in stone. It’s fluid. We shape and change it constantly, even without realizing it. So no matter which type you’re tilted towards, it’s never too late to switch from one to another.

Lesson 2: Practice powerless communication to get support when you need it.

There’s a scene in the funny, romantic comedy Ghost of Girlfriend’s past, where Matthew McConaughey’s mentor tells him that “the power of the relationship lies with whoever cares less.” As the film will go on to show, that’s a very sad statement to live by, and according to Adam Grant, it’s also not true.

Most of the time we’re told to be confident, to speak up, to assert ourselves, and sometimes, that’s necessary. However, Adam says there’s nothing more convincing than giving up power.

When you communicate powerlessly, you don’t focus on what’s in it for you. In true giver fashion, you focus on the other person and you ask questions and seek advice. It creates zero resistance in the other person, because it puts them in power, so naturally, many people will choose to help you.

For example, when a woman working at a Fortune 500 company had to re-locate, she was about to have to quit her MBA studies. Feeling powerless, she asked the HR manager “What would you do?” and ultimately ended up getting exclusive access to the company’s private jet to relocate and be able to attend classes.

There’s no force, no game, no sweet talk in powerless communication. It’s just natural, human, pure honesty, and that’s what makes it so powerful.

Lesson 3: You can’t burn out as a giver, as long as you see the impact you create.

If you keep on giving, you will win. Maybe not today, maybe not tomorrow, but some day, you will. However, sometimes even the most generous giver can get burned out and exhausted.

I’ve been surprised at how much energy I have recently, especially considering how little food and sleep I get on some days (don’t worry, nothing too extreme :)). Thanks to what Adam has found out, it now makes perfect sense: givers don’t have to work less hours, they have to see more of the impact they make when helping others.

As long as you see the purpose in the things you do, there are very few limits on your productivity. Every time I get an email saying “Thanks Nik, your site really helps me,” or a small payment, or a share on Twitter, that puts fuel in my tank to want to wake up the next day and work even harder (I’m writing this at 8:30 PM on a Sunday, fyi).

Burnout is for the purposeless. Find a way to see the impact you have as often as possible and you’ll be able to give for however long it takes.

Give And Take Review

I don’t know if you believe in karma, but I do. There’s something about coincidence that makes me think there’s gotta be some kind of cosmic scoreboard – and I’ve never regretted giving too much. I don’t know what success will look like for me. But I sure know that Give And Take made me want to keep on giving. I hope it’ll do the same for you.

Who would I recommend the Give And Take summary to?

The 19 year old Instagram & fitness blogger, who’s tired after not seeing results 6 months in, the 39 year old executive, who just received stock options from his company and considers selling them all, and anyone who sometimes feels burnt out from being taken advantage of.

Rate this book!
This book has an average rating of 4.1 based on 9 votes.