1-Sentence-Summary: Games People Play is a classic book about human behavior which explains the wild and interesting psychological games that you and everybody around you play to manipulate each other in self-destructive and divisive ways and how to tame your ego so you can quit playing and enjoy healthier relationships. 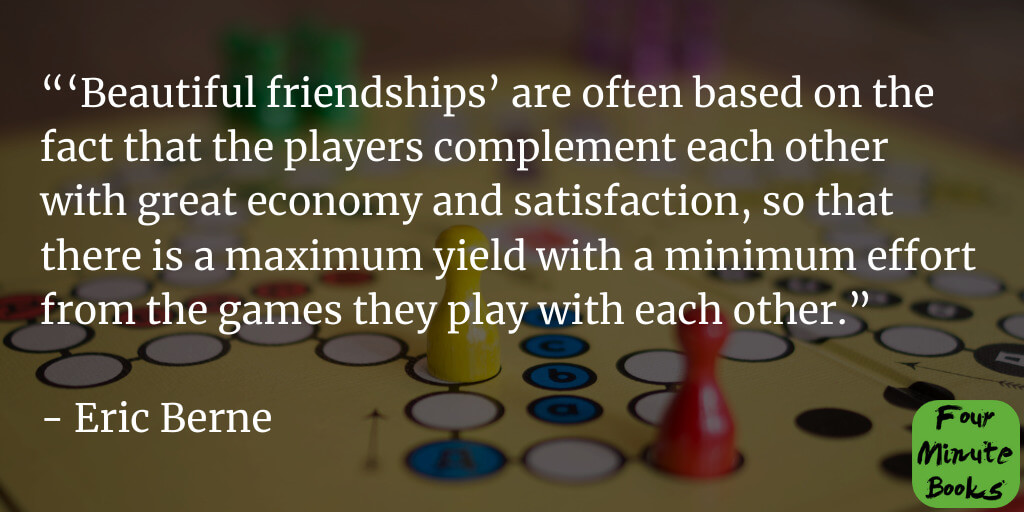 Almost every time we interact with another person, we play psychological games. These can be power games with our boss, sexual games with a love interest, or maybe competitive games with our friends. Whatever type of game we are playing, it’s usually manipulative and we don’t even realize we’re doing it.

Fascinating, right? In the classic best-selling novel Games People Play: The Psychology of Human Relationships psychiatrist Eric Berne reveals the psychology behind our interactions with others. Released in 1965, the book’s wild popularity made it one of the most influential pop-psychology books of all time.

Berne exposes the familiar unconscious maneuvers that each one of us does to get what we want from others. You’ll recall classic games like the lethal couples battle “If it Weren’t For You” or flirtation games like “Let’s You and Him Fight.” Though some of the context is outdated, the ideas are as powerful as ever.

Want to play a game? Let’s jump right into these lessons and see what we can learn!

Lesson 1: Parent, Adult, and Child are the three ego states that everybody can act within.

Even though it seems like humans behavior is pretty random, there are recurring behavioral patterns. As a psychiatrist, the author saw thousands of patients, and he found that each person fell into the category of one of three ego states: Child, Parent, or Adult.

He found whichever state you’re in depends on both your past and your present. For example, a child will copy whatever their parents do, so this is where the Parent ego state comes from. So if you had a father who shouted when you did something wrong, you may unconsciously do this exact thing to your child.

The Adult ego state is where rational thinking comes from. As we discover how to reflect on our experiences, we learn that we can make choices based on the present situation. It uses logic to tackle problems. For example, it comes out when you need to figure out how to fix a car with a broken engine.

Lastly, the Child is the pattern of behavior that we’re born with. This spontaneous ego is the origin of our emotions and intimacy. It usually gets buried under the other two egos, but there are ways to come out from its influence. An example of when our Child ego comes out is during sex, which isn’t logical or taught by our parents.

Lesson 2: Depending on which ego state and what situation you’re in, you’ll play different games with other people.

Whenever we interact with people, we are in one of these ego states, and the other person is in another. Sometimes it might be obvious which state you’re operating in, but when it seems like you’re acting in one state but you aren’t, you’re playing a game.

Confused? Here’s an example of a game called Alcoholic. In this game, the alcoholic asks her family for help. It may seem like she’s acting like a rational adult. But in fact, she’s challenging those around her to see if they can stop her, so she’s really being the rebellious Child.

The other players might act like Adults who want her to stop, but deep down they are being the Parent and wanting to scold her. This scolding gives the alcoholic what she wants in the first place— fuel to her self-pity which will lead to more drinking.

Another example of a game is Why Don’t You- Yes But. In this game, someone comes to people with a problem, such as what car to buy. The people around them offer suggestions, but none of them are relevant because the person asking always has a problem with the suggestion.

It may look like people talking as rational Adults, but the people being asked act as Parents giving advice, and the person asked is acting like a Child who basically is repeating “no matter what you say, you can’t help me.” Refusing help lets them keep playing the Child who is “stuck” with an unsolvable problem.

There are even games in psychotherapy, such as Indignance. In this game, the psychotherapist and client want everything to stay the same. So they talk about problems, appearing like Adults, but in fact, neither of them wants anything to change.

Lesson 3: If you can learn to live without playing games then you’ll become closer to the people you love.

After learning about games, you can see most of them are either harmful or pointless. So the way to a more fulfilling life would clearly be learning to live without them.

This can be difficult because games allow us to be more comfortable, without them we would have to reveal more of our true selves. They allow us to be social with people without having to be vulnerable.

But the author teaches vulnerability and intimacy are necessary for human connection.  Though it’s hard, we need to learn to drop the games.

First, we need to understand the egos. By doing this we can recognize when we are playing a game. Make sure you are dropping the charade and being honest about what you truly want and encourage others to do so. This vulnerability will allow you to connect better with those around you.

What a strange, interesting, insightful, and helpful book! Games People Play made me realize some things about human nature that I sort of always knew but hadn’t ever really thought about. If you liked this then you should go watch The Imitation Game because the main character is excellent at spotting and calling out the games people play!

Who would I recommend the Games People Play summary to?

The 37-year-old therapist who wants to know how to stop letting their ego get in the way of truly healing people for good, the 16-year-old who is tired of all the drama in school, and anyone that wants to become smarter about human nature than anyone around them and benefit from a life without relationship games.

Rate this book!
This book has an average rating of 4.6 based on 11 votes.