1-Sentence-Summary: Don Quixote is a classic novel from 1605 which portraits the life and insightful journey of Don Quixote de la Mancha, a Spanish man who seems to be losing his mind on his quest to become a knight and restore chivalry alongside with a farmer named Sancho Panza, with whom he fights multiple imaginary enemies and faces a series of fantastic challenges. 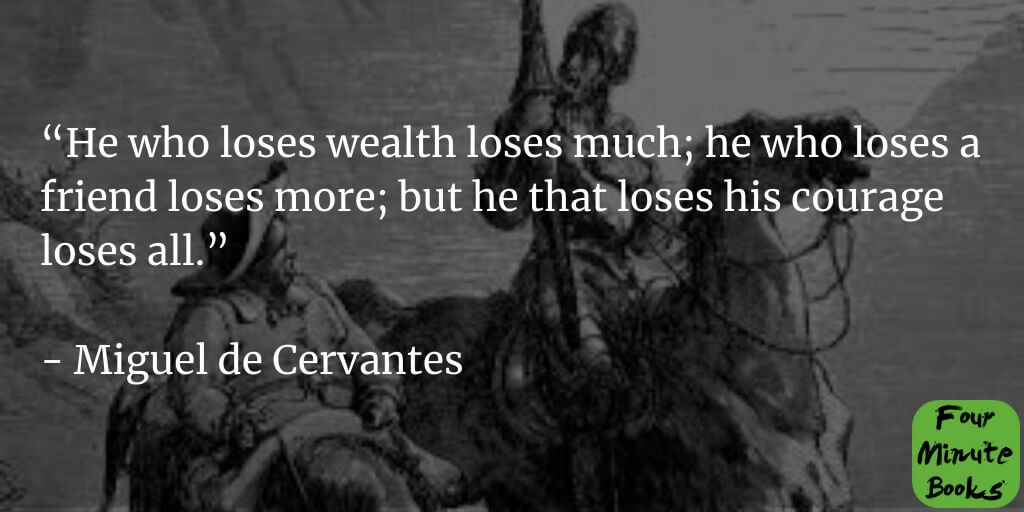 Don Quixote is one of the most renowned pieces of writing ever created and the second most translated book in the world. Miguel de Cervantes wrote this remarkable novel more than 400 years ago, yet here we are today, still reminiscing on the story of Don Quixote de la Mancha, a Spanish middle-aged gentleman who had a dream of bringing chivalry back to its original glory, starting from transforming himself into a knight.

His challenging quest started after reading multiple books on chivalry, romance and fantastic characters. These sparked a purpose in his heart and marked the beginning of a journey. Don Quixote believed in chivalry and what it stood for: helping the defenseless, and fighting the wicked. As such, he started to anchor himself in these beliefs. He created a magic version of the world he lived in in his mind.

Soon after, he took Sancho Panza, a local farmer, as his squire in the journey that would follow. Moreover, he promised Sancho that upon their successful return from the quest, he’ll make him the governor of an isle. Their journey reveals significant insights hidden under metaphors and beautiful lessons that we’ll soon explore.

Among them, here are my three favorite ones:

Although the book is a fictional piece of writing, it’s valuable lessons can teach us some important aspects of life. For this reason, let’s explore each lesson to see what they have to offer!

Lesson 1: Telling ourselves stories can help us right away, but create a false impression of the world on the long term

Don Quixote read a lot of books that sparked the “madness” in his head. He believed that his favorite books portrayed the world as it is. So he started to see everything with magical eyes. The problem was that nobody else was sharing his vision, so he had to face a lot of misunderstanding and challenges in his relationships.

While his friends didn’t believe in his vision, Don Quixote was sure that he was a knight in a chivalry world. Everything seemed to be normal to everyone else. But to him, they were fantastic beasts and enemies that he had to fight. Moreover, he took on a quest to help the poor and defenseless. He also wanted to do away with the wicked and evil, just like a true knight would do.

However, the problem was that to all those around him, there was no need for knight-errantry. There were no enemies to fight, and no fictional world to live in. For the protagonist, it looked like everyone was turning against him. And that no one was understanding his vision. Unfortunately, the loneliness and the eventual realization that his beloved books were not in fact expressing the reality of the world brought the bitter end to his life.

Lesson 2: Every knight needs a squire, or someone to share the ideas and challenges with

Initially, Quixote started his quest all by himself. And his first challenge as a knight happened at an inn he stopped by on a night. The first signs of his delusional mind showed when he believed the inn to be a castle. To initiate his purpose, he was looking for someone to officially knight him, as custom dictates. As such, he asked the innkeeper to do so. And he went along with it, seeing that the man wasn’t sane.

Soon after, Quixote knocked out two men who touched his armor, and he was kicked out of the inn. Seeing this, the protagonist realizes that he needs a squire and more supplies. He returns home to recruit a farmer named Sancho Panza in his quest. He also promised him to make him the governor of an isle upon their return. The two men faced many challenges in their mission.

The first one consisted of over thirty windmills that Quixote took for giants that he and Sancho had to fight. Unfortunately, the windmill breaks his lance and drags him with the horse on the ground. Later on, the two retreat in a forest where they talk and Don Quixote thinks about Dulcinea, an imaginary woman of his dreams that he had a tight relationship with.

The relationship between Don Quixote and Sancho, as well as him and Dulcinea shows a common characteristic of all men. Everybody needs a soul to share their troubles and challenges with, or a best friend. Moreover, just like a knight needs his lady, a man needs a woman to idealize, to think of in times of trouble and come home to after the many challenges faced in a day.

Lesson 3: Sancho was an opportunist, but also a good friend to Don Quixote

Sancho Panza was a simple farmer from Spain, so the course of his life should’ve been smooth and filled with little adventures, as the society of that time wasn’t paying much attention to peasants. However, life had other plans for Sancho when it pur Don Quixote in his path. Given the opportunity to become the governor of an isle, Sancho had two options.

He could either pass the offer seeing that the man was clearly insane, or take the risk, leave his village, and go explore the unknown with Quixote. The opportunity outweighed the risk, so the two went on the quest to bring back chivalry to its former glory. Naturally, Sancho saw that the windmills were, in fact, not giants, or that the inn wasn’t a castle with beautiful ladies, but he didn’t want to ruin the protagonist’s dream.

In every challenge Don Quixote faced, Sancho was there to help him get out of it and treat him afterwards. When a fight occurred, Sancho stepped in to help. Although he was a simple farmer who knew his condition, he was actively looking to overcome it and seize opportunities. Moreover, Sancho was admiring Quixote for his courage and even tried, for a second, to imagine the world as Quixote did, hence opening up his perspective.

Don Quixote is a story of fiction addressing the human condition through metaphors and the challenges of the protagonist. Reading between the lines is what will reveal significant insights for the reader, as the book teaches us what an unhealthy dose of unsanity does to a human, yet a good dose of it combined with the willingness to take risks can take anyone further in life. Don Quixote delivers a captivating narrative, a series of useful lessons for its readers, and enriches one’s culture, so it’s a must read for everyone.

Who would I recommend the Don Quixote summary to?

The 30-year-old fictional reader who loves a goold old story, the 45-year-old teacher who finds value in old pieces of writing who kept their meaningfulness over time, or the 50-year-old person who just discovered a more spiritual side of themselves and is looking to study the classic creations of the world.

Rate this book!
This book has an average rating of 4.6 based on 12 votes.