1-Sentence-Summary: 21 Lessons For The 21st Century highlights today’s most pressing political, cultural, and economic challenges created by technology while helping us prepare for an uncertain future. 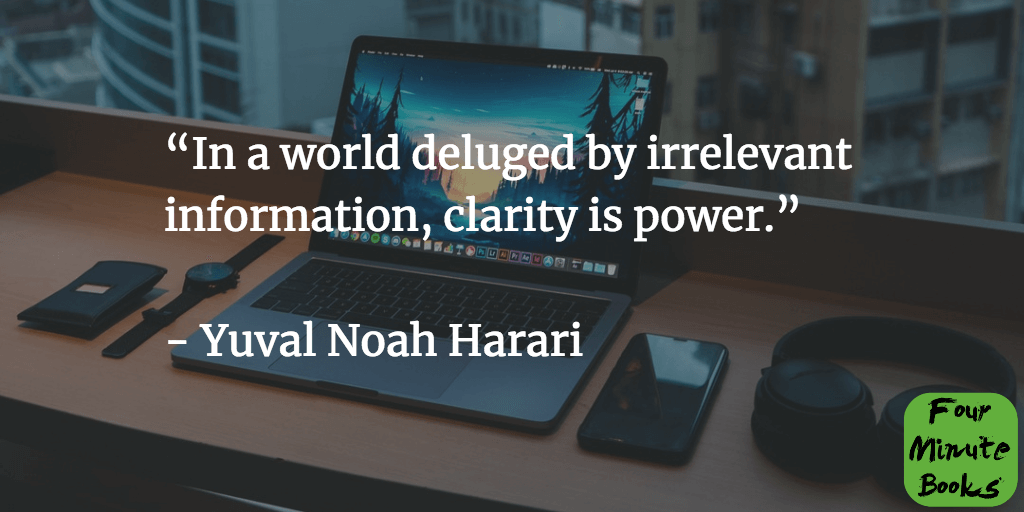 How do you prepare your children for the year 2050? Or even the year 2100? It’s a great question, especially because nowadays, no one knows what the world will even look like then. Historically, humans could make at least decent assumptions about where the world was headed. But in today’s fast-paced, technology-fueled civilization? Forget it!

However, that doesn’t mean it’s not worth giving our best to prepare for an uncertain future. In 21 Lessons For The 21st Century, Yuval Noah Harari helps us do just that. After his previous bestsellers Sapiens, which explored the human past, and Homo Deus, which focused on our distant future, his latest book is about our biggest challenges in the here and now and how we can deal with them.

Here are 3 from his 21 lessons to help us and future generations thrive in the 21st century:

Are you sometimes worried about the future? Don’t fret, let’s prep!

21 Lessons For The 21st Century Summary

Lesson 1: Data has become the most valuable asset, which is why technology disrupts all our systems.

Different ideologies have always shaped how humans see and steer the world. Whichever one grabs the most people tends to determine our history for decades. In the 20th century, fascism, communism, and liberalism fought for that privilege. Liberalism ended up being the clear winner.

Depending on which ideology dominates, different assets grow in value. Whatever’s most valuable is the thing politicians and nations will fight for, thus deciding what future the world progresses towards. So far, in the 21st century, technology seems to have all competitors beat. It’s the thing we most believe in.

With technology being our prime ideology, data becomes the most valuable asset. That’s why politicians struggle for their nations to win the giant tech race. The problem is that this time around, no one fully understands the implications of our ideology. Just look at the financial markets, where algorithms already do most of the work, with very few traders grasping what’s actually happening.

For politicians, this lack of understanding quickly becomes a threat. People are frustrated, feel ignored, and realize the representatives they elected don’t deal with the most important topics.

And yet, we know just as little about technology as they do.

Lesson 2: We believe we have a lot of knowledge, but we don’t and that’s dangerous.

I rarely talk about politics with my family, but when we do, we like to joke about the “genius” of certain policymakers. In Germany, it’s common for the minister of economics to suddenly become the minister of health. Highly specialized offices are swapped like Christmas presents, which makes no sense. How could someone be an expert in both medicine and military defense?

In reality, this problem befalls all of us, however. That’s why we talk so much about cognitive biases on Four Minute Books. To help us think a little better. One of them is what Harari calls ‘the knowledge illusion.’ Basically, we think we know a lot more than our ancestors when, actually, we know less in many regards.

For example, we all rely on many experts to live our everyday lives. We can’t hunt our own food, build our own shelter, or make our own clothes. We think we’re smart, but just because we can access all the world’s knowledge doesn’t mean it’s already in our head.

Instead, we should stay humble, be thankful, and do our best to never stop learning.

Lesson 3: School needs to start teaching us how to think, not what to think.

Neil deGrasse Tyson once gave a great speech on the value of knowing how to think vs. just knowing what to think. Sadly, our schools only teach us the latter. Even higher education still very much centers around cramming as many facts into your head as you can, only to spit them out once on a piece of paper, then forget them again. That’s a problem.

A basic understanding of history, biology, math, and other subjects is important, no doubt. But beyond that, it’s more important that we learn how to navigate the modern sea of information, how to filter out the important, and how to determine what’s downright false, than just remembering more facts.

With more data being created now in a single year than the past few millennia combined, future workers won’t need to know as much as possible, but how to find out only that, which they really need to know. For our kids to have a thriving future, that’s what we must teach them how to do.

21 Lessons For The 21st Century Review

I’d rather read one book like 21 Lessons For The 21st Century each year than consume any news. With this, you know about everything important that’s going on and can decide how to act on which information. Some topics, you won’t think further about, others might even change how you raise your kids. With 21 Lessons For The 21st Century, Yuval Noah Harari once again captures interesting aspects of humanity in enlightening stories. A truly informative read.

Who would I recommend the 21 Lessons For The 21st Century summary to?

The 21-year-old recent graduate, who’s just starting her life as an adult in this century, the 53-year-old father, who feels lost amid all this new technology, and anyone who’s worried about our future.

Rate this book!
This book has an average rating of 4.4 based on 20 votes.